It’s May 8, 1945. In Europe and around the world, people took to the streets to celebrate the end of the war. It was dubbed V-E Day (as in Victory in Europe Day) which signaled the end of World War II and was definitely cause for celebration in Europe. Targeted for a May 2015 release in the UK, the forthcoming British film, A Royal Night Out, follows the exploits of two teenage sisters as they are allowed out at night for, probably, the first time to join the party. Sounds pretty harmless, right?

Not quite as the two young women in question aren’t your every day youth. Their home just happens to be Buckingham Palace. The two teenagers are Princess Margaret (Bel Powley) and the future Queen of England, Elizabeth II, played by Sarah Gadon. Rupert Everett and Emily Watson star as King George and Queen Elizabeth, the parents that ultimately make the decision to let the two out of their sight for the evening to party with all of London after six long years of war come to an end….with chaperones, of course. We are talking about the future Queen of England, after all. 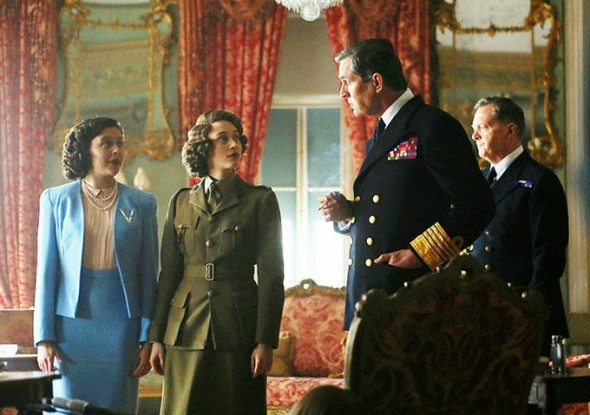 A Royal Night Out is said to be based on ‘untold true events’ so while the then Princess’s diaries do confirm something like this happened, it’s like most teenagers’ first night out without parental supervision, we’ll probably never really know what truly happened. One has to believe that there is a bit of writer’s embellishment involved in A Royal Night Out. Overall, the film is a traditional account teenagers going out for the first time stuff. They have fun, get home too late, parents are worried, etc. Pretty harmless. It’s no Hangover 3….which is a good thing.

A Royal Night Out

A Royal Night Out is set for UK release in May to coincide with the 70th anniversary of V-E Day. No word as of yet as to a release in the U.S.