More often than not, fortunately or unfortunately, the story lines of the brilliant British situation comedy, W1A, are far too close to reality and, in some cases, frighteningly accurate. For instance, how many out there have suffered through meetings like this…

In the case of W1A, the comedy which stars Downton Abbey’s Hugh Bonneville as BBC head of values Ian Fletcher, the lines of reality and fiction have definitely blurred to where it’s hard to distinguish between the two. Aside from endless meetings like the one above that we all sit in periodically, recent events have proven to blur the lines even further. Jon Morton, creator of W1A, has put a storyline about the star into the first episode of series 2, written months before Top Gear hit the headlines with the recent Jeremy Clarkson incident reared its head. 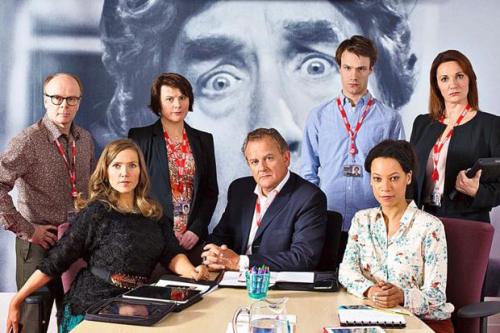 Bonneville, who is currently filming series 6 of Downton Abbey, joked at the Broadcasting Press Guild Awards recently, where W1A won the best comedy/entertainment program award that, “Jeremy Clarkson is mentioned quite a bit but he won’t be in it himself. We’ll have to see if he is cut out”. When asked if the actual Clarkson crisis might somehow find its’ way into an upcoming episode of series 2 of W1A,  “You’ll have to wait and see,” smiled series producer Paul Schlesinger, as he collected the award.

Jeremy Clarkson or no Jeremy Clarkson, W1A borders on being one of the most brilliant comedies on television today. Maybe it’s because it hits so close to home for so many or, maybe, it’s  just brilliant. Either way, look for series two to hit the BBC in late April with a public television run sometime later in the year.