Even though it was 1975, it seems like it was just yesterday that I was standing in line at the Esquire Theatre in Dallas for the ‘world premiere’ of this unknown film called Monty Python and the Holy Grail. After about an hour in line, they handed each of us coconuts and moved us inside. As we really had no clue as to what the film was about, we just knew it was from the brilliant minds of Monty Python so it would definitely be worth the wait. Fortunately, it only took about 5 minutes before we understood the importance and meaning of getting a coconut as a parting gift for attending the premiere. 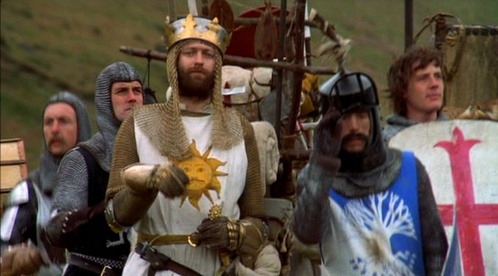 Along those lines, imagine what it would be like if this unknown film, Monty Python and the Holy Grail, was released today and some person tucked away in some remote movie promo trailer department had to cut the trailer for the film and had no idea it was a comedy. Thankfully, Stéphane Bouley has done just that, creating a trailer that sells the film as a tragic, yet epic blockbuster worthy of making far more than the original film grossed back in the mid-70’s.

Having watched Monty Python and the Holy Grail at least once a year for the past 40 years, I knew that there was so much more to The Black Knight. Such a complex individual. Now it all makes sense. I know it’s not a proud moment and a definite violation of an individual’s personal space when you find their diary and read it without their permission, but in the case of the Black Knight, I had to make an exception. While Friday seemed to be a particularly bad day, Saturday was extra tough and Sunday says so much. The next week began with such promise and a new hobby and but, understandably, spiraled quickly downhill…well, you know why.

Happy 40th to Monty Python and the Holy Grail. To celebrate, members of the comedy troupe will attend at 40th anniversary screening as part of this year’s Tribeca Film Festival. The film will screen at the Beacon Theater on Friday, April 24. Your going to need more than a coconut to get in so don’t forget to get your tickets when they go on sale March 31. #TBT