At long last, the doors of Nonnatus House are set to re-open this Sunday on PBS stations across America! While, in reality, it’s only been several weeks since series 4 ended in the UK, it has seemed like a lifetime for fans of the series to have to avoid any spoilers on the Internets waiting for the residents of London’s East End to return.

In the series 4 premiere of Call the Midwife, which returns to PBS this Sunday at 8:00pET/7:00pm CT, it’s no secret that Jenny Lee, played by Jessica Raine, has left the building (Nonnatus House). It’s now 1960 and it’s been a little over three years since Jenny left her comfortable home to become a midwife in London’s East End slums. Charlotte Ritchie joins the cast as new nurse Barbara Gilbert while Nonnatus House tackles one of its toughest cases yet. Her character is described as naive and chaotic and, she struggles a bit while trying to make a good ‘first impression’ (sounds a bit like a 1957 version Jenny Lee if you ask me). “She begins quite badly and sort of redeems herself a bit later on,” Ritchie said, adding: “She has a couple of really tragic moments which is awful and then she kind of gets into her stride a bit more – but she still continues to make mistakes along the way.” 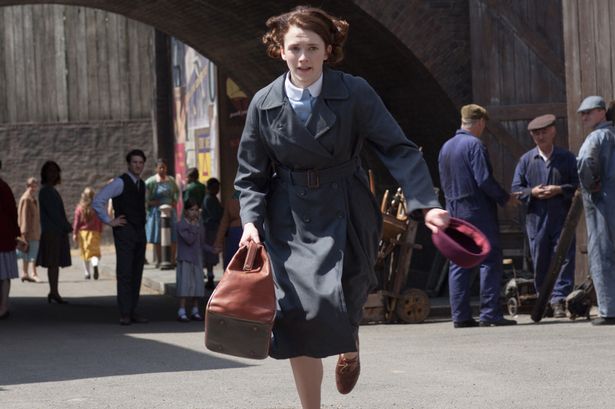 In addition to Ritchie, there will be more new faces arriving in Poplar as viewers not only have said goodbye to Jenny, but also Nurse Cynthia Miller, played by Bryony Hannah, as she heads off to the Mother House. With only Trixie and Patsy left, Linda Bassett (Sense and Sensibility, Lark Rise to Candleford) will also join the group at Nonnatus House as Nurse Phyllis Crane in episode two.

What fans of the series really have to look forward to this season is more of what has made it such a Sunday night destination for the past three years. What you will see is just how far the drama has come in only three short series. To viewers, what makes the show as popular as it is, is that the show has never shied away from featuring dark and upsetting storylines….realistic storylines that do not shy away from the intolerances that marked the early 1960s. And, you actually care about everyone in the show. Viewers will need to have a box of Kleenex close by as the fourth series is proving to be darker than ever before, and, I think, all the better for it. With series 4, Call the Midwife seems to have embraced even further the grim and gritty world of London’s East End in new and unapologetic ways.

As you sit down on Sunday, amidst all the red cardigans and scenes of Chummy learning how to ride a bike, the drama will be tackling some pretty difficult issues on a weekly basis this season from child neglect and the persecution of homosexual men to stillbirth and syphilis, all the while still managing to be both gripping and entertaining at the same time. Trust me, you’ll be glad you avoided the Internets the last couple of months.