When it rains drama on PBS, it pours. Next up in the long line of ‘well worth your time television viewing to help you deal with the fact that there’s still 9 months until both Downton Abbey and Sherlock return’ is Home Fires, the series inspired by Julie Summers’ non-fiction book, “Jambusters”. The 6-part series is set to transmit this spring on ITV and Fall 2015 on PBS. Francesca Annis (Cranford, Return to Cranford) and Samantha Bond (Lady Rosamund Painswick in Downton Abbey) lead a group of inspirational women in a rural Cheshire community living in the dark shadow of World War II. 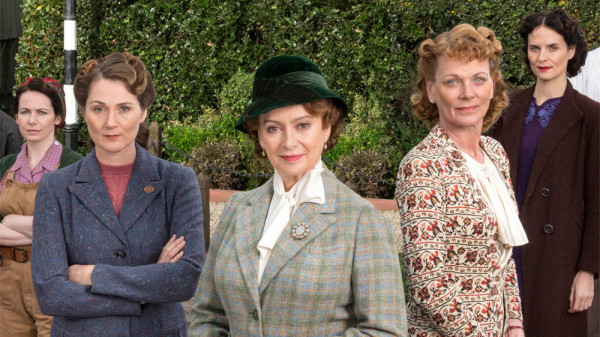 As the conflict takes hold, separating women from their husbands, fathers, sons and brothers, those left behind find themselves under increasing and extraordinary pressures in a rapidly fragmenting world. Together, they form the Great Paxford Women’s Institute, whose sole purpose is to help maintain the nation’s fabric in its darkest hour. While the members of the isolated village couldn’t feel further away from the impending bloodshed and battlefields, they soon find out they are not immune from the effects of war.

Home Fires also stars Ruth Gemmell, Mark Bonnar, Claire Rushbrook, Mark Bazeley, Frances Grey and Ed Stoppard. And, in true Alfred Hitchcock-style, look for Julie Summers cameo appearance in the series. “I am thrilled to be appearing in a cameo role as a WI county organizer,” said Julie. “My grandmother, a life-long WI member, would undoubtedly approve of me wearing a hat.”

Look for Home Fires this spring on ITV and Fall 2015 on PBS!