Ant & Dec’s Saturday Night Takeaway has been a staple of British Television for over 15 years. Returning in 2016 for their 13th series, the live variety show is hosted by Anthony McPartlin and Declan Donnelly, a.k.a. Ant & Dec. Their shows have not only been a fixture on British television since 1994 when they got their first television presenting job on the children’s show, Gimme 5, which aired Saturday mornings on CITV in the UK. Following shows on CBBC, Channel 4 and back to ITV, the duo made the quantum leap to nighttime television in 2001 trying out several different formats and concepts. In 2002, Ant & Dec’s Saturday Night Takeaway was born. 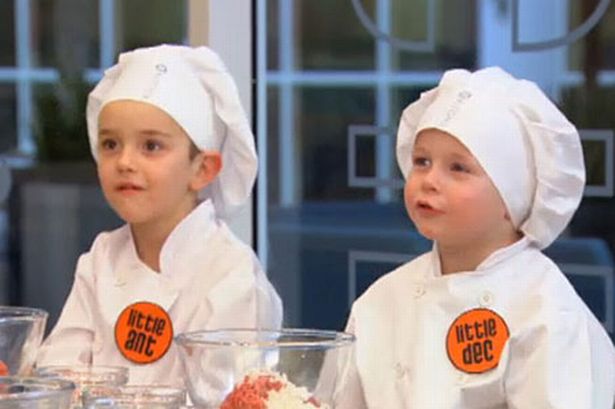 In 2013, 10 years after the original series premiered on ITV, the presenting duo decided to bring back ‘Little Ant & Dec’, their sort of Mini-Me dopplegangers, for the new season of Saturday Night Takeaway. Unfortunately, the original Mini-Me’s were now 18 and probably wouldn’t appreciate being called ‘little Ant & Dec’ any longer. After an extensive search to find their replacements, 6-year old Neil Overend of Durham, the new Little Ant, and 5-year-old Haydn Reid, also of Durham, the new Little Dec.

Armed with their charge of being unleashed upon a rather unsuspecting world of celebrities, one of their first targets in 2014 was Harry Gordon Selfridge, himself, and Lady Mae.

While they were probably more impressed with meeting Wayne Rooney or One Direction, Little Ant & Dec  held their own as they stepped back in time to take on Jeremy Piven (Mr. Selfridge) and Katherine Kelly (Lady Mae). Being summoned to Harry’s office was bad enough but then they had to wear those sailor suits….