You’d think, given the recent headline grabbing events surrounding the filming of Top Gear, there would be a memo circulating with instructions around BBC Broadcasting House that Jeremy Clarkson’s name mustn’t be mentioned at the BBC. When that happens, life and art will officially blur as evidenced in the case of the new series of the comedy, W1A, where the former Top Gear host will have his voice and face pixelated. 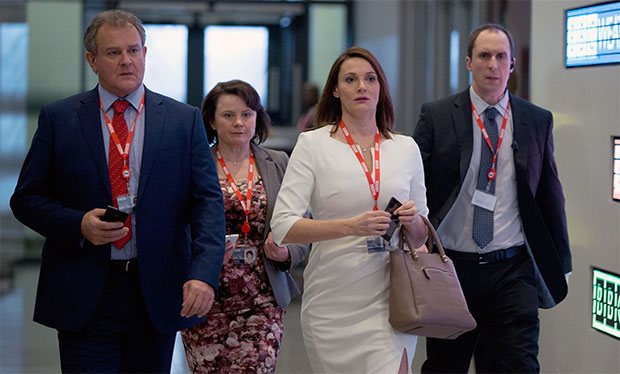 While he didn’t punch his producer in the fictional BBC world of W1A, Clarkson, once again, finds himself in the middle of controversy. The first episode of Jon Morton’s satire about the BeeB returns to BBC Two with an hour-long episode on Thursday, 23 April, with a more than timely episode sub-plot that involves deleting all the archive episodes of Top Gear in which Clarkson uses the word “tosser”.

As David Tennant’s brilliant narration explains, this action is necessitated due to widespread complaints from the public about his use of the word in the “BBC sitcom Top Gear”. During the “Damage Limitation Meeting”, the task of sifting through four years of footage of the show and writing down the offensive bits falls to the chronically stupid intern Will Humphries, played by Hugh Skinner.

The episode was written before Jeremy Clarkson was told his Top Gear contract would not be renewed following his altercation with producer Oisin Tymon. However, the W1A production team then decided to make comic mileage from the Clarkson plotline by the edits, meaning that Clarkson’s face in archive footage is pixelated, with his name also bleeped out from the narration.

“I wrote this episode in July last year so the only thing we did was add a voice over and to bleep Clarkson and clumsily pixelate his face so hopefully we got another couple of little jokes out of that,” said Morton who also directed the episode. Executive producer Jon Plowman was quite clear in his explanation for the reasoning behind the decision to bleep Clarkson’s name out and to pixelate his face. It was done because it was the “…kind of thing that Ian Fletcher would do“. Fletcher of course, is the BBC’s increasingly by the day frustrated Head of Values played by Downton Abbey star Hugh Bonneville. Why by the day? You need look no further than Fletcher’s PR ‘guru’, Siobhan Sharpe, who can’t wait to rename BBC2 to….BBC2.

Series 2 of W1A starts 23 April at 9pm on BBC2 (if it’s still named that next week). Public television fans of the series can begging looking for series 1 broadcasts beginning in Fall 2015.