Now that we’ve thrown a bit of a bone to the Downton Abbey-Nation with yesterday’s post about the cast getting together for initial read-throughs of the final series scripts, it’s time to turn our attention to Sherlock! It is only fitting, and fair, that we bring you news from the production set of the forthcoming Christmas special. While series co-creators/co-writers, Steven Moffat and Mark Gatiss have each separately written individual episodes over the last three series of Sherlock, the next installment in the best show on television will be the first time they have collaborated and written a script together. With the Sherlock special likely to air at Christmas, Gatiss is optimistic that it’s the start of a longer term partnership. “It’s been a real joy,” he says. “I think it will carry on for the next series.” 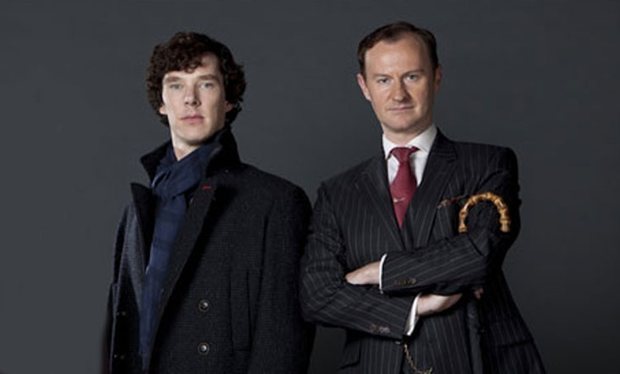 In a world that increasingly finds very little to agree upon, I think it’s fair to say that we can all agree on one thing…Sherlock is brilliant. Aside from pulling together the talents of the likes of Benedict Cumberbatch, Martin Freeman, Una Stubbs, Lara Pulver, Andrew Scott, Mark Gatiss, Louise Brealey, Rupert Graves and a host of others, one of the reasons it ‘works’ is the combined life-long passion/obsession for ‘all-things Sherlock’ of both Steven Moffat and Mark Gatiss. For both Moffat and Gatiss, their passion began at an early age and continued into adulthood.

Gatiss, besides sharing co-creator/co-writer credits with Moffat, stars as Sherlock’s calculating brother, Mycroft. He recently sat down with Radio Times for a full-length interview in this weeks edition wetting the appetite of both fans of the series who already have their DVR’s set for Christmas 2015 and also those fans making plans to attend  Sherlocked,  the official Sherlock convention, which is only a few days away at the Excel Center in London. “My mum got me The Adventures of Sherlock Holmes when I had German measles, aged ten,” Gatiss recalls. “I loved the flavor of Arthur Conan Doyle’s stories. He was a master storyteller and you get a brilliant snapshot of Victorian Britain.” It was pretty much the same story for Moffat, who doubles as the current Doctor Who show runner, another series that he has been a fan of since childhood.

“Sherlock happened because Steven Moffat and I were in the same place, singing from the same hymn sheets,” said Gatiss. “The idea of making Sherlock modern again was one of these light bulb moments. We just looked at each other and went, ‘Someone should do that.’” Don’t know about you but I’m right up there with millions of fans across Planet Earth that are glad they are the ones that did it.

You can read the full interview in this week’s Radio Times, in shops on Tuesday 21st April and for newsstand for iPad and iPhone.