With the news that Downton Abbey will end following the forthcoming 6th series, the Internets have been on fire with suggestions for sequels, prequels and series that could possibly replace the British period drama juggernaut. Leave it to Rob James-Collier, who plays the dastardly Thomas Barrow, to come up with the perfect replacement. Imagine. People from Downton with lightsabers! It really doesn’t get any better than this! 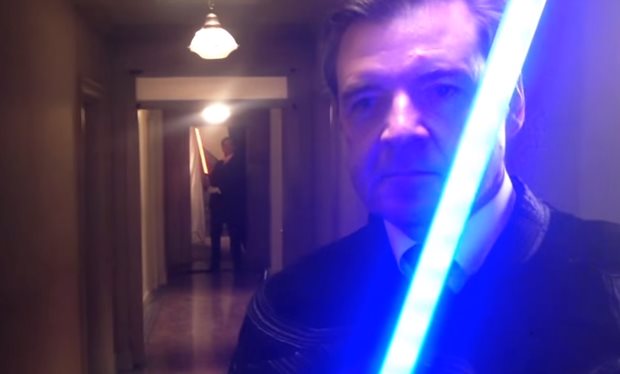 It seems as though Thomas and Mr. Bates have advanced well beyond  their customary practice of trading insults in favor of lightsabers. In a special video filmed by Rob James-Collier on his iPhone during time between takes in their filming on series 6, we have, in the blue corner, Mr. “You Learn a Lot in Prison” Bates, played by Brendan Coyle, versus Thomas ‘The Evil Butler’ Barrow, in the red corner. You will quickly see their 5+ year resentment for each other escalate beyond our wildest dreams in episode one of Downton Wars “The Phantom Valet”. When Anna (Joanne Froggatt) gets involved, it’s quite clear that the force is strong between these two as there is little she can do to help Mr. Bates at this point. There is one at Downton, however, in which ‘the force’ is much stronger…

Lest you think the final series of Downton Abbey will be taking a decidedly odd Star Wars turn, the video is all to call attention to and aid in James-Collier’s participation in the London Marathon tomorrow to raise money for his charity, The Chilterns MS Centre, via his website www.evilbutler.com. The original thought was to create the video to help him raise £10,000 pounds. Once the total is reached (which is has), ‘the evil butler’ would release the second installment of Downton Wars “The Evil Butler Strikes Back”. According to James-Collier, more than £10K has been raised so look for part two soon as we all know we can trust Thomas at his word, right?