Call the Midwife fans who were glued to the telly watching episode 5 on Sunday night on PBS were probably beside themselves when they learned that Sister Mary Cynthia had returned to Nonnatus House. Introduced in series 1 as Nurse Cynthia Miller, the midwife left Poplar on New Year’s Eve 1959 to become a ‘nun in training’ at the Mother House in Chichester. Having seen the next several episodes already, long-time fans of the series are in for more surprised and treats in the weeks leading up to the series 4 finale on Sunday, May 17.

While she’s not technically ‘returning to Poplar’, there will be another familiar face in episode 7, scheduled to be broadcast on Sunday, May 10. Not to worry, Sherlock fans. Una Stubbs, a.k.a. Mrs. Hudson, is only renting some time at Nonnatus House. She will be back where she rightfully belongs at 221b Baker Street before you know it for the new Sherlock special…like, maybe, this Christmas perhaps?? 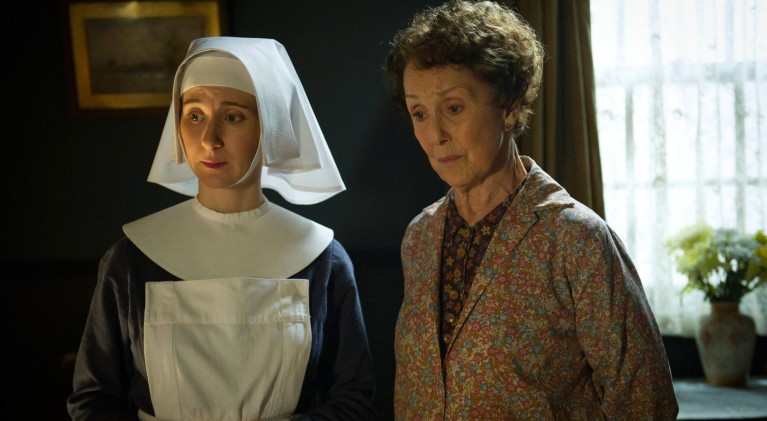 In episode 7, Sister Evangelina returns to work as old school friends Shirley and Marion come to the maternity ward. They both have daughters but when a fire breaks out, in the confusion, Sister Evangelina gives them the wrong babies. When Marion’s baby is seen to have a heart murmur the parents have to be told the truth but Marion’s reaction is surprising. Barbara attends to Fred’s elderly cousin Tommy Mills, who is bed-ridden but when Tommy’s wife Gert (Stubbs) is diagnosed with cancer she refuses to leave him for a hospital operation. Tommy and Gert have not been apart since the war and the idea of separation, even for an operation, is not an option. Barbara and the recently returned to Nonnatus House, Sister Mary Cynthia, rise to the occasion to help.

“I am a fan of the show so I snapped it up when they said would I like to do it,” says Stubbs, who admits to “definitely” having a cry while watching the period drama. “It’s beautifully written, beautifully done, beautifully acted. I think it’s a real class program.” Stubbs is also a big fan of the fact that CTM not only stars women but features a female writer and director.

The Sherlock actress said she found being a guest star on the hit BBC show “…a little bit nerve-wracking. Although they did everything to make me feel at home I was still quite shy being the new person on the block.” But she was quick to describe regular stars Charlotte Ritchie and Bryony Hannah, who she shares most of her scenes with, as “little darlings.”