Some of you might think this is a bit of a stretch to be featured on Tellyspotting but not really come to think of it. Follow me here. Game of Thrones essentially follows the the story lines of the novel, A Song of Ice and Fire. It is set in the fictional Seven Kingdoms of Westeros and chronicles the violent dynastic struggles among the realm’s noble families for control of the Iron Throne.

The novels and the series derive aspects of their settings, characters and plot from various events of European history. A principal inspiration for the novels is the English Wars of the Roses which took place from 1455–85 between the houses of Lancaster and York. See how easy that was? Not one Kevin Bacon reference needed to get me from Game of Thrones to Tellyspotting. 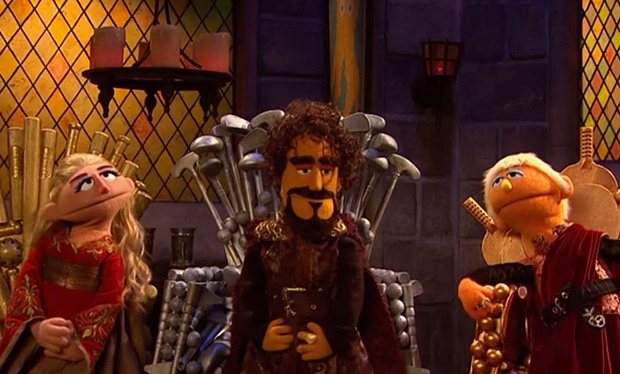 As a follow-up to their brilliant House of Cards wind-up, PBS’ Emmy award-winning children’s series turns it creative talents to the HBO series, Game of Thrones. In Sesame Street’s “Game of Chairs”, Jesteros needs a new king. As with the Game of Thrones, the competition for the throne is tough and Game of Chairs is no exception. As with all Sesame Street parodies, they are spot on with their thinly veiled GOT references to one participant needing to hurry and ‘get to a wedding’, another, Joffrey, ‘choking’ as he loses out in his quest for the throne, another who lost out and ‘couldn’t think of a more horrible ending than this’ and, finally, Ned Stark in ‘losing his head’ in dire situations. They just have too much fun….

In the end, amidst almost impossible odds, it was Grover Bluejoy who triumphed and was crowned unlikely king of Jesteros.