It’s no secret that the Duke and Duchess of Cambridge are expecting their second baby. What they might have been trying to keep secret is that when the time is right for the royal bundle to arrive, Prince William knows exactly who to call. While the Queen stands ready to lend a helping hand when Kate goes into labor, surprisingly, they turn to Call the Midwife’s Chummy, according to Newzoids at least as they head to the Lindo Wing at St Mary’s hospital in London. 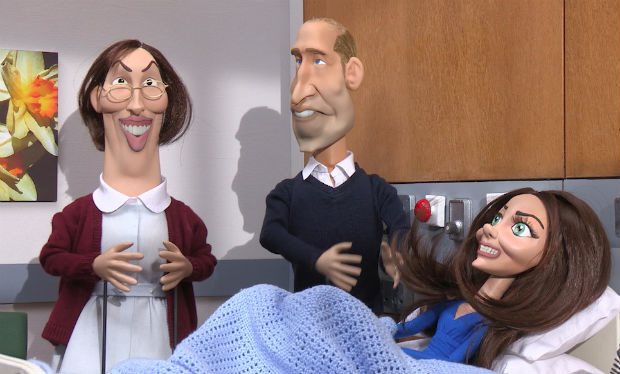 One can only imagine the daunting task that Newzoids has taken on by spoofing the Royal Family. Now, they set their sights on targeting one of the most-watched drama series on the BBC in decades, Call the Midwife. This particular episode aired this past Wednesday at 9:00p on ITV. You should try to catch it on the ITV Player if you get a chance.

Proving the no one is safe from the ‘Newzoid treatment’, this isn’t the first time, however, that the Duke and Duchess of Cambridge have made their way to the puppet sketch show. An earlier episode had William and Kate expressing their concerns that Prince George may be ‘a bit too common’.

If you’ve missed the series so far, not to worry. There are three episodes remaining in the 6-part series that will air over the next three Wednesdays at 9p beginning 6 May on ITV.