UPDATE: Leading up to the August 23 premiere of Season 2 on PBS, McKellen and Jacobi will serve as Grand Marshals of New York City’s 46th Annual Pride March on Sunday, June 28, the largest gay pride parade in the United States. Joining them as Grand Marshals are J. Christopher Neal, a New York artist and leader of FluidBiDesign, and Kasha Jacqueline Nabagesera, co-founder of the first Uganda Pride celebration. McKellen and Jacobi will also be speaking at the NYC Pride Rally on June 26 to kick off the weekend’s festivities. See the two talk about their participation in a brilliant special video message.

It’s been awhile but, at long last, Sir Ian McKellen and Sir Derek Jacobi are back and are as tempestuous as ever. The two ‘Sirs”, who star as Freddie and Stuart, an elderly couple who have lived together in their Covent Garden flat for half a century, will be joined by Frances de la Tour, who is also back as their flighty neighbour Violet, along with Iwan Rheon, Marica Warren and Philip Voss as Ash, Penelope and Mason, respectively. 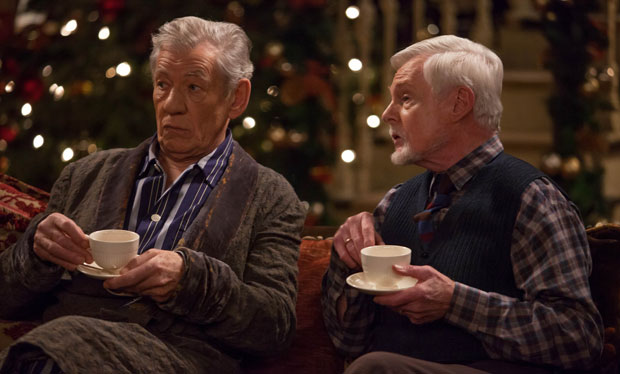 Set to return later this month on ITV, the series will begin its second go-round on PBS beginning later in 2015. While no one can argue with the brilliant cast, the first series was met with mixed reviews with those who enjoyed the 70’s feel to it in one corner and those thinking it was a cross between being old-fashioned and homophobic. Thankfully, that didn’t deter those in charge at ITV from commissioning a new series, which last aired in 2013.

Look for ITV to air Vicious later this month with PBS in America not far behind.