Simon Pegg (Shaun of the Dead, Hot Fuzz, World’s End),  stars as Neil Clarke, a teacher at a failing secondary school who is unexpectedly given the power to do anything by simply saying it so by a group of power-crazed aliens. Sounds harmless enough, right? Well, maybe not as the ‘aliens’ aren’t quite what you’d expect given they are voiced by director Terry Jones and Monty Python pals John Cleese, Eric Idle, Terry Gilliam and Michael Palin.

The only thing occupying their collective mind palaces is to decide whether or not the inhabitants of Planet Earth live or die based solely on his actions. Unfortunately, Neil goes ahead and does what we suspect many would do and shamelessly use the power to improve his own life. When he does try to make things better (such as reanimating the dead), it all goes wrong.

Why he thinks reanimating the dead will make things better is probably best left for another day but as he fights his desire to make life better or just his life, in general, better, Neil is faced with trying to win the heart of Catherine, the woman he loves all the while having to deal with his best friend, Dennis the dog, who can now talk. Now, we’re talking pressure! 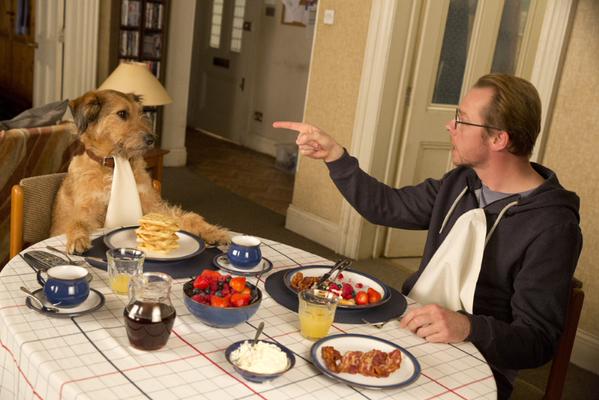 Featuring the late Robin Williams in his final role as the voice of Dennis the Dog, Absolutely Anything also stars a number of very recognizable faces including Kate Beckinsale, Eddie Izzard, Joanna Lumley and Sanjeev Bhaskar.

Absolutely Anything lands in UK cinemas on August 14 with a U.S. release TBA.