UK viewers who find themselves left with a big Poldark hole in their television viewing on Sunday nights have but only this Sunday (10 May) to find something to occupy their time. According to Eddie Marsan, there will still be “plenty of totty on Sunday nights” when the new fantasy drama Jonathan Strange and Mr Norrell premieres the following Sunday, 17th May, on BBC1. 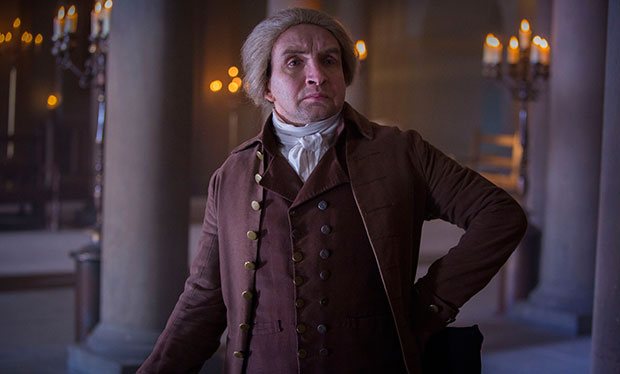 Eager to discover why magic is no longer practiced in England, Honeyfoot and Segundus of the York Society Of Magicians, known to be some of the wisest and most magical men in Yorkshire, visit mysterious recluse Mr Norrell (Marsan) in search of answers. The seven-part drama is adapted from the novel by Susanna Clarke, and also features Marc Warren (The Musketeers) and Alice Englert (Beautiful Creatures). Clarke’s novel is an alternative history set in 19th-century England around the time of the Napoleonic Wars and is based on the premise that magic once existed in England and has returned with two men, Gilbert Norrell and Jonathan Strange.

Adapted for television by Peter Harness (Wallander, Case Histories, Doctor Who), magic is widely acknowledged, but rarely practiced. Living in the rural north, Mr. Norrell of Hurtfew Abbey is able to make the statues of York Cathedral talk and move. His manservant, John Childermass (Enzo Cilenti), persuades him to travel to London to help in the war against France. While there, Mr. Norrell encounters a leading member of the government and makes magic respectable in the realm when he conjures a fairy to bring the minister’s fiancée (Alice Englert) back to life.

Meanwhile, also in London, Jonathan Strange (Bertie Carvel) meets Vinculus (Paul Kaye), a magician on Threadneedle Street, while attempting to propose to his love Arabella (Charlotte Riley). Strange is told by Vinculus that he is destined to be a great magician and begins to study magic.

Fortunately, no Poldark separation anxiety feelings as of yet for U.S. viewers as the series is set for a June 21 premiere as part of PBS’ Masterpiece series.