For the first two series of Death in Paradise, the BBC comedy/mystery/drama which is set on the fictional Caribbean island of Saint Marie, was a bit painful to watch mainly because of the extremely uncomfortable nature in which London-based DI Richard Poole (Ben Miller) tried to deal with the island paradise and it’s laissez faire way of life. I emphasize this is the ONLY reason as, overall, Death in Paradise is one of the best on-going series currently on the BBC and on public television in America. For Miller, his real life finally began to imitate his fictional DI Poole life when he decided to leave the island paradise for real. He explained that “…it was the job of a lifetime, but logistically I just didn’t feel I could continue. My personal circumstances just made it too complicated, but I will miss it like a lung. I love it here.” 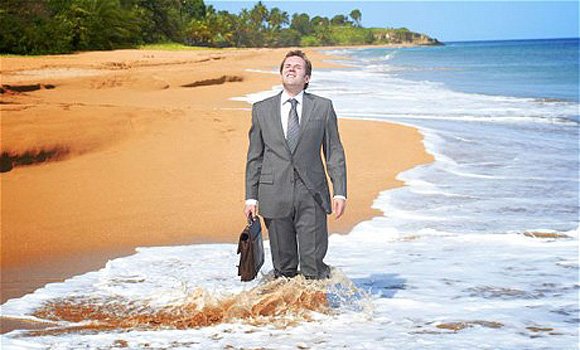 Beginning with series 3, Miller decided to ‘vote himself off the island’ and DI Richard Poole became the latest island murder statistic. DI Humphrey Goodman, played by Kris Marshall, was called in to solve the crime. While DI Goodman seems to be enjoying his time on the island, one has to wonder if he would have come to Saint Marie had he known the history of the DI position on the island as, if you remember, it was Poole who first came from London to investigate the murder of his predecessor on the island. 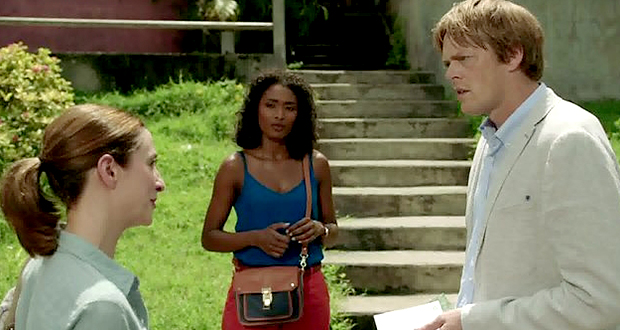 For series star, Kris Marshall, who considers the series to be a cross between Colombo and Scooby Doo, filming Death in Paradise for six months out of the year in the intense Caribbean heat is not all….well, paradise. When asked about what it was like, Marshall said, “Eighty per cent of the time it’s the most amazing job in the world. The other 20 per cent, it’s like putting on a wet suit, getting into a sauna and doing Hamlet. It’s that hot. In the police station the walls close in on you. You start to go mad.”

While being a part of a high-successful BBC series has infinitely more ups than downs, filming 14 hours a day, six days a week in tropical heat isn’t all ‘paradise’. “You miss your friends, you miss Guinness and roast dinners, you’re dying not to speak French any more…” said Marshall. “But then, when you get home, you think: Why was I wishing for this? It’s grey, it’s raining, I’m stuck on the M4 in traffic.”

Currently filming series 5, which will be broadcast in 2016 on BBC1 and on public television in America, Marshall is feeling much more comfortable in the role of DI Goodman. Gone are any thoughts of just making sure he doesn’t do anything to crater the increasingly popular comedy/drama/mystery series. Both Marshall in real life and DI Goodman in fictional life seem to be enjoying their respective time on the island, intense Caribbean heat aside, and fans of the series are the beneficiaries.

So all this talk about putting on a wet suit in a sauna and doing Hamlet seems to be a small price to pay to spend six months of the year working in the Caribbean. What about you?