I guess given the fact that the forthcoming series of Downton Abbey will be the last (I hope you knew this and I’m not just breaking the news to you), it’s inevitable that the Dowager Countess will soon face reality and see the need to downsize in the not-too-distant future. Byfleet Manor, the 6,ooo foot, eight-bedroom manor house, which has been home to the Crawley matriarch since Downton Abbey‘s inception, is up for sale.

According to Radio Times, it can be yours for what seems to be the fairly reasonable price of £3.95 million. While definitely one of the more costly bits of memorabilia available from the series, the listing also includes four additional lots available, three with existing residential dwellings and one development plot. 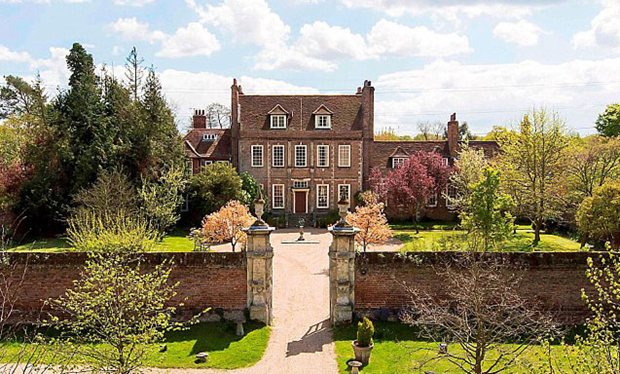 Befitting of the needs of Lady Violet, the manor sits on 19 acres of land and can be found at the ‘end of a winding country lane’ and is ‘discreetly positioned for privacy and security, says Savills, the estate agents managing the sale. The history of the building extends back to the 7th century and is first recorded in 1086 in the Domesday Book, which is the manuscript record of the ‘Great Survey’ of much of England and parts of Wales completed in 1086 by order of King William the Conqueror.

Located near Byfleet, Surrey, and situated roughly 50 miles from Highclere Castle, the fictional home for what will end up to be the six series of Downton Abbey, Byfleet Manor was built in around 1686 and is just over 20 miles from the center of London and 15 miles from Heathrow Airport.

While downsizing is definitely ‘in the cards’ for the Dowager Countess, the home’s current owners are, most likely, hoping to secure a small fortune from Downton fans who might be hoping to buy themselves a piece of the show’s history. It’s worth thinking about if you’re the ultimate Downton Abbey fan and find yourself in need of more than the complete series 1-6 DVD boxed set as a remembrance of six wonderful years.