Many members of the Downton-Nation have not yet come to grips with the notion that, come March 2016, there will be no new episodes of Downton Abbey on the horizon. It seems as though the cast has accepted their fate and are, in fact, dreaming up series endings as they are in the middle of filming. Hugh Bonneville (Lord Grantham), Lesley Nicol (Mrs. Patmore), Laura Carmichael (Lady Edith), Robert-James Collier (Thomas) and Phyllis Logan (Mrs. Hughes) share their thoughts as to what they’d like to see happen to their character in ‘life after Downton’.

As you can see, most are fairly predictable with wishes for new careers, finding love or keeping old friends made at Downton. Leave it to Hugh Bonneville to give Lord and Lady Grantham a true fantasy ending. His wish? To shirk the responsibilities of the estate and head off to the Riviera in an open top car to have a little fun. “Stuff the estate, stuff the children, stuff all the problems!” he laughs, speaking to Masterpiece PBS. 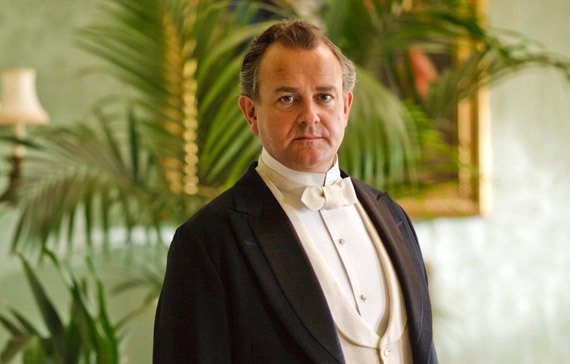 Bonneville did acknowledge that although it does feel right for the series to come to an close after 6 series, he admits that it will be difficult . In an interview with Radio Times, the Earl of Grantham said, “Series five was supposed to be the last so this one is a bonus and it feels right for the story. Of course it’s sad. We’re filming the final episodes now. When we finish there’ll be tears.”

While there have been rumors too numerous to keep up with regarding the future of Downton from the extremes of a Downton feature film or a TV spin-off set in the 1970s, Bonneville joked, “Great idea. I think we should combine those two thoughts. Let’s make a film set in the 1970s in which Lord Grantham wears flares and a kipper tie. I can see it now.” That said, Lord Grantham would, in reality, be on the wrong side of 100 years old in the 70’s but, I guess, it is TV after all..