The UK institution known as Red Nose Day has landed in America. Who knew the flight from Great Britain to America would take right at three decades. The 25+ year staple of a night of BBC 1 programming and the UK’s #1 television fundraising effort finally makes its way across the pond and will be broadcast tonight on NBC.

Originally, the brainchild of Richard Curtis (Four Weddings and a Funeral, Bridget Jones Diary, Notting Hill, Vicar of Dibley, Blackadder) and Lenny Henry (Chef), Comic Relief was launched on Christmas Day in 1985 live on the BBC to highlight the famine crippling Ethiopia. Not long after, the concept of “Red Nose Day” was created to focus attention on Comic Relief’s activities with the first ever RND event in 1988 raising an impressive £15million. Since its inception, the event has raised over £1 billion to help change lives in the UK and Africa. 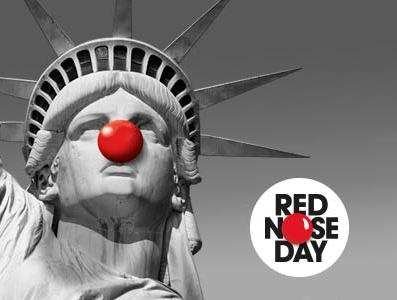 As with their UK counterpart, the American version of Red Nose Day will be executive produced by Richard Curtis and will bring together some of Hollywood’s biggest stars, including Julia Roberts, Will Ferrell, Jennifer Aniston, Reese Witherspoon, Jodie Foster, Jimmy Fallon, Neil Patrick Harris, Coldplay and more, to have fun, raise money and change lives. The benefit event, which will be broadcast tonight on NBC from 8-11pET, will help 12 charity organizations lift children and young people out of poverty, in the U.S. and in some of the poorest communities in the world such as Africa, Asia and Latin America.

Red Nose Day in the UK is nothing short of a cultural phenomenon. It’s an institution. The entire country gets involved. The entire British acting community lends their time and talents to this effort. While it will take time for the American version to live up to its British cousin, everyone has to start somewhere and, you have to admit, the UK did have a 30-year head start. Should be a fun night to watch where, hopefully, everyone comes together for a very worthy cause. Here’s a tease of what the night will bring…