Monty Python‘s first foray into film was a compilation of sketches from their first two television series called And Now For Something Completely Different. While Monty Python and the Holy Grail was considered the comedy troupe’s first “proper” film, it was immediately hailed as comic genius and achieved widespread success both from a critical and audience standpoint.It still lives on today as a permanent fixture in the midnight feature world at cinemas across the U.S.

It wasn’t until some 30 years later when original Python, Eric Idle, John du Prez and Neil Innes adapted the film into the original Broadway production, Spamalot, which was directed by Mike Nichols. It subsequently won three Tony Awards, including the Tony Award for Best Musical of the 2004–2005 season and received 14 Tony Award nominations. 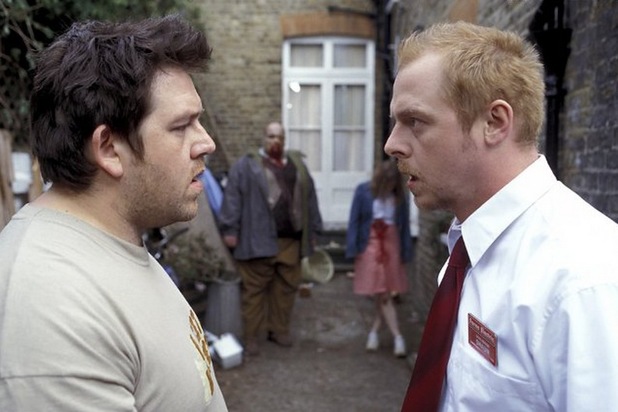 Is it possible that the same could hold true for Shaun of the Dead, the brilliant Edgar Wright and Simon Pegg mind palace creation? Doubtful, but hey, you never know, it could happen. A stage adaptation of the 2004 cult classic, Shaun of the Dead, is in the middle of a 15-date tour of the UK which concludes this summer with a couple of October dates to follow. Personally, I’m thinking more Rocky Horror Picture Show than Spamalot. Adapted for the stage by Chas Burns (who also stars as Shaun), Shaun of the Dead Live is made up of musical numbers inspired by the film’s soundtrack and includes audience participation, who are also encouraged to dress up as zombies. Can’t imagine this bit of gold won’t be included although I’d love to see how the audience participation will play out….

Beginning tonight, if you are in and/or around the following areas, there are still a few dates left in the summer portion of the tour with seats available that, quite possibly, have your name on them.

If not then, it sounds like a great way to spend Halloween in London…