If you happened to have switched over on Thursday night to see how America pulled off their inaugural attempt at Red Nose Day, there was a very British feel to the program (even if it was backstage) as The Theory of Everything‘s Eddie Redmayne, Sherlock‘s Benedict Cumberbatch along with Sir Ian McKellen and Dame Helen Mirren did their British best to help out their American Red Nose Day newbie counterparts.

Redmayne kept wishing everybody lots of luck, as if they were about to find out if they’d won an Oscar, there was Dame Helen Mirren in the Red Nose Day kitchen offering up tea in some very over the top British mugs and, perhaps the greatest of all, Sir Ian McKellen taking control of the teleprompter and getting Gwyneth Paltrow to say “Ian McKellen is the greatest person of all time…“.

Even angst-ridden vampire, Robert Pattinson (Harry Potter, Twilight) lent his services in the car park valeting cars for the ‘real’ US stars of the event. He, obviously, had trained for some time for this as he never hesitated in knowing which side of the car the steering wheel was on.

The Office co-creator/co-writer/co-director, Stephen Merchant, also appears to have written a new play “for charity” that he, Rose Byrne and Gwyneth Paltrow would star in which didn’t fully showcase Merchant’s brilliance. Finally, it was abundantly clear that Benedict Cumberbatch has been away from his Sherlock roots for way too long as he is seen struggling more than just a bit with even the simplest of administrative tasks as he tries to find words for the cue cards. 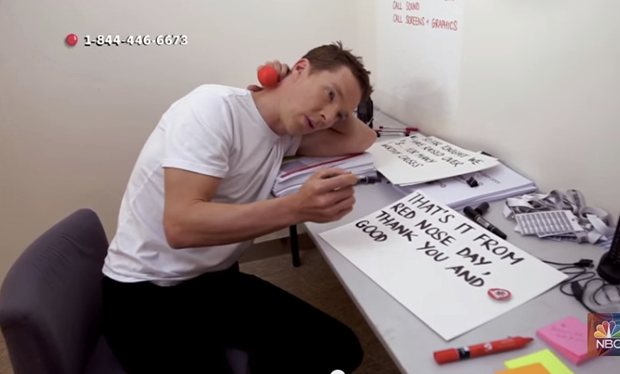 The ultimate highlight of the evening was British band, Coldplay, and the cast of Game of Thrones joining forces for the band’s most important project yet — a musical for HBO’s Game of Thrones series. Unfortunately, for Coldplay’s Chris Martin, Mark Addy’s singing ability leaves a bit to be desired. Fortunately, Jon Snow, a.k.a. Kit Harrington, arrives and with just a phone call and an offer of free food the cast begins to show. Harrington’s rendition of “Wildlings” to the tune of “Wild Thing” is worth the price of admission alone. And, it if’s a success, looks like Martin (Chris, not George R.R.) might be tackling Downton Abbey – The Opera and/or Breaking Bad – The Ballet in the future.

This piece is vintage UK Red Nose Day. If the American version can keep up this level of gold then Thursday’s effort will the beginning of a long and lasting relationship stateside.