We all knew it was only a matter of time before the American re-make Gods rose up and, once again, flexed their collective misguided muscle. Targeting what just may be the only British series left that has, somehow, successfully avoided the dreaded makeover, Friends co-creator Marta Kauffman has signed on to create a U.S. version of the British medical comedy/drama, Doc Martin.

Starring Martin Clunes as the gruff, ill-mannered and socially inept Dr. Martin Ellingham, the 7th series of the British version is currently filming in Port Isaac and will transmit in September in the UK and early 2016 on public television stations in the States. 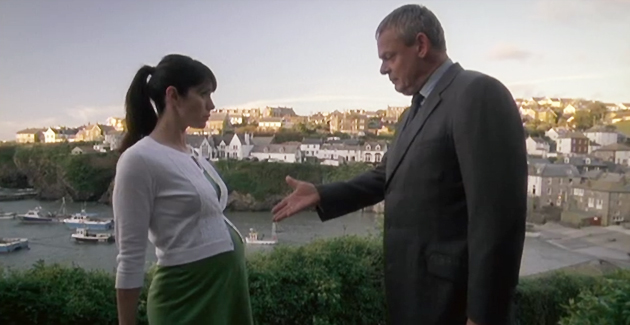 Armed with their collective enthusiasm about the brilliance of the British original, Kauffman and Ben Silverman of Electus Productions believe they can do something that virtually every producer has been unable to do since Norman Lear re-made Till Death Do Us Part into All in the Family. “Doc Martin has changed viewers worldwide with its excellent concept and unique style of comedy, and we’re proud to be working with Marta Kauffman on this exciting show,” said Silverman.

Much of the success of Doc Martin is due to the brilliant work of Martin Clunes. Let’s hope producers don’t go the Broadchurch route and convince Clunes to star in the U.S. version and give him an American accent. We all know how that worked out for David Tennant and Gracepoint.

Call me crazy but hasn’t the American version of Doc Martin already been done and wasn’t it called House?