Full disclosure. I don’t profess to know all there is know concerning the recent allegations by the U.S. Department of Justice with respect to FIFA, the international governing body for football, and the possible role bribery has played over the years in the selection process for past World Cup sites. That said, I know just enough to be dangerous so it’s hard to argue with the following from British comedian, John Oliver….. 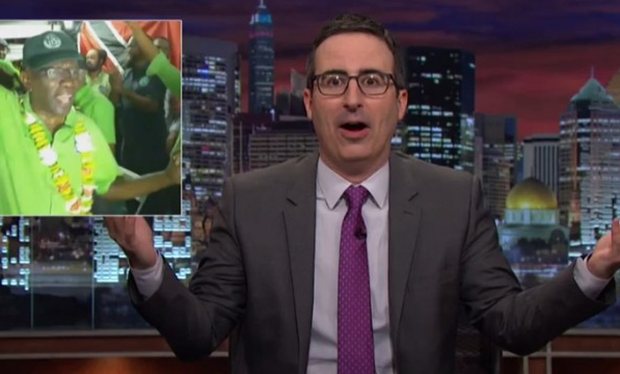 Every week, John Oliver, the host of Last Week Tonight with John Oliver continues to raise the brilliance bar with his pointed commentaries. Whether it’s net neutrality, climate change or his more recent target, the scandal that rocked the world of FIFA, Oliver is usually spot on. Earlier this week, Oliver bought time on local Trinidad and Tobago TV to get some clarification and, point blank, ask former FIFA VP, Jack Warner, to keep his promise to release an ‘avalanche of files’ that may link FIFA president Sepp Blatter to the corruption scandal.

Round 1: John Oliver vs. Jack Warner.

Is that Michael Buffer I hear? “Let’s Get Ready to Rumble”

The ad, called The Mittens of Disapproval Are On, featured Oliver in the Last Week Tonight studio encouraging Warner to release everything.

Independent Liberal Party leader and former FIFA VP, Jack Warner, one of 14 people charged with racketeering by the US Department of Justice hit back and replied to John Oliver’s appearance on CCN TV6. It seems clear that Warner took exception to Oliver’s mocking tone and decided to release his own video in response complete with a very creepy and unnecessary background piano track.

Accusing Oliver of mocking his country, Warner seemed to totally miss the point of the piece while taking great offense to Oliver’s comments. “I don’t need any advice from any comedian fool who doesn’t know anything about this country,” he says. “To tell me what file to release or not to release. That is not his business. I take no instructions from him. And worse yet, I won’t take any instructions from an American at this point in time.”