As Father’s Day comes to a close, there’s a good chance that you might be more familiar with this particular Dad’s work than his son’s lengthy CV simply due to the fact that Dad will be forever remembered as the Third Doctor in Doctor Who. Jon Perwtee portrayed the Doctor from 1970-1974, replacing Patrick Troughton. Following his five-season effort as the Doctor, Pertwee went on to have a very successful career as a voice and stage actor until his death in 1996.

Pertwee’s son, Sean, has followed in Dad’s footsteps having put together a very successful acting career with his most recent role coming in 2014 when he was cast in the Fox prequel series, Gotham, which digs deep into the origin of the characters of the Batman franchise. Pertwee stars as Alfred Pennyworth, a tough-as-nails ex-marine from east London who loyally serves the Wayne family as head of security. Alfred also learns that he has been named as young Bruce’s legal guardian by the Wayne parents in the event of their absence. Alfred agrees and presents himself to Bruce as his butler. In the wake of his parents tragic deaths at the hands of a mugger, he is fiercely protective of the young Bruce Wayne, the boy who will eventually become Batman (Oops! I hope I didn’t just give this away!).

Whether this was designed as a Father’s Day tribute or not, Sean recently ‘channeled’ his Dad’s most famous role by posting a pic on his Instagram page with the caption, “Son and Hair. Doctor Pennyworth #DW3″. With a little help from photoshop to provide Dad’s trademark “Doctor Who do”, this looks eerily just like his Dad. 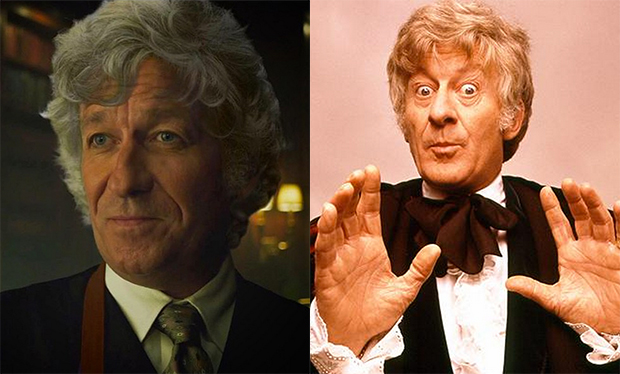 As Radio Times points out, all we need is to grab David Bradley to portray William Hartnell and, maybe, Patrick Troughton’s son Michael and we have ourselves a Thirteen Doctors special in the offing. What do you think?