Series 3 of Last Tango in Halifax, the Sally Wainwright-written drama, which stars Sarah Lancashire, Derek Jacobi, Anne Reid, Nicola Walker, Tony Gardner and Dean Andrews returns tonight at 8:00p ET / 7:00p CT as part of PBS’ Sunday Drama Night. Joining the cast for series 3 will be Sherlock and Scott & Bailey star, Rupert Graves. A story about romance and second chances, Last Tango in Halifax, which premiered on PBS in 2013, tells the story of two widowers, (Jacobi and Reid), reunited after 60 years via Facebook. 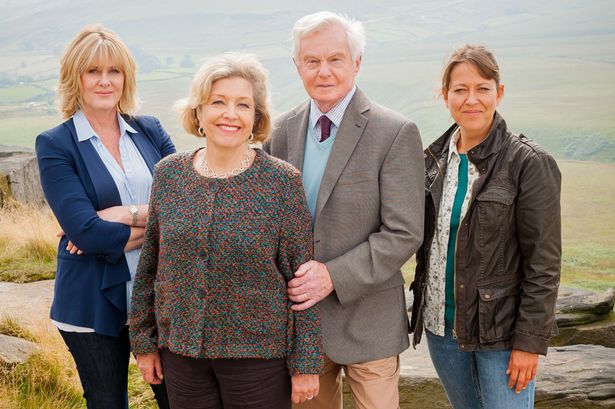 If you are new to Last Tango, here’s a quick refresher before tonight’s series 3 premiere. In series 1, childhood sweethearts Alan and Celia, both widowed and in their 70s, fall for each other all over again when they are reunited on the internet after nearly 60 years. Both Alan and Celia have daughters, whose dysfunctional lives bring drama at every turn. In series 2, secrets from the past come tumbling out, family members adjust to changing relationships and Alan and Celia begin to plan a life together as they negotiate family baggage. There you go. Now you’re all caught up for the series 3 premiere tonight.

Last Tango in Halifax is based on lead writer Sally Wainwright’s personal experiences. She described it as “…the most personal thing I’ve ever written“. Her mother, Dorothy, lost contact with a childhood friend, Alec Walker, when she was 15, but they reconnected on the social networking website Friends Reunited 60 years later and within six months were married. Wainwright said the relationship between her mother and Alec “…was so beautiful and uplifting that it inspired everyone around them“.