Sunday night brought to a close the Clarkson/Hammond/May Era of Top Gear. Without getting into the who’s right/who’s wrong politics of the events leading up to the dismissal of Jeremy Clarkson, who has been a fixture on the series since 1988, let’s review the final piece in the Top Gear puzzle as it played out Sunday night on BBC 2. Richard Hammond and James May, who hooked up with Clarkson beginning in 2002 as co-presenters, were in studio without an audience. Given Clarkson had been dismissed and his contract wasn’t to be renewed, he was confined to a pre-recorded message. But, in true Top Gear fashion where virtually anything goes, Hammond and May managed to find a replacement which proved pretty popular with viewers…the proverbial ‘elephant in the room’ 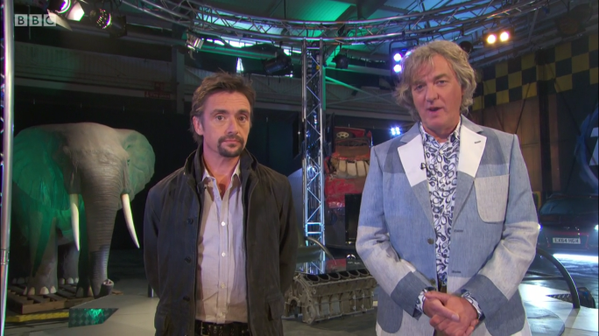 The final episode, with Hammond sporting a rather sinister looking beard which seemed to lend a bit of authenticity to the semi-serious tone of the final episode and May decked out in a coat that only Tom Baker could love, featured two previously unseen films linked together by some rather solemn bits from the two in-studio hosts. Since no one has ever accused Top Gear of being poignant, it was on with the show doing what Top Gear does best with one bit where Hammond was strapped to a bi-plane, a segment where they each bought SUVs at bargain-basement prizes and put them through their paces and, finally, where the three co-presenters raced around a track pulling caravans which was fitting given their ‘love’ for caravans.

Before we leave Top Gear as we know it, one can never forget one of the best segments ever with Richard Hammond’s challenge of racing a 1000 horsepower Bugatti Veyron against an RAF Euro Fighter Typhoon.

These were the type of segments we’ve come to know and love while being very envious of over the years. They were just having fun. Pure silliness. Just three “grown-ups” playing with big grown up toys called trucks and cars. In the end, however, Sunday’s final episode was left to Hammond and May as they delivered a dignified and quiet “…thank you for watching” and “…goodbye” to their millions of loyal fans. I’m sure Clarkson, Hammond and May will be back in some form or fashion on another car show on another network in the not-too-distant future. In the meantime, as far as Top Gear goes, Radio 2 Breakfast Show host, Chris Evans, has signed up to replace Clarkson on the BBC2 motoring show with a few as yet to be named co-hosts.

Widely known in the UK for his love of cars, Chris Evans said: “I’m thrilled, Top Gear is my favorite program of all time. Created by a host of brilliant minds who love cars and understand how to make the massively complicated come across as fun, devil-may-care and effortless. When in fact of course, it’s anything but and that’s the genius of Top Gear’s global success. I promise I will do everything I possibly can to respect what has gone on before and take the show forward.”