I guess I’m a day late and a dollar short with this post as, given how #TBT (Throw back Thursday) has taken the Internets by storm, we should have put this up yesterday. How about if we not judge and look at it from the perspective that I’m actually 6 days ahead of my time. Much better….

First off, the first movie I ever went to see in the cinema was Jason and the Argonauts, Ray Harryhausen’s 1963 story of the legendary Greek hero, Jason, who leads a team of adventurers in a perilous quest for the mythical Golden Fleece. There are so many memorable scenes in the film that highlight Harryhausen’s endless stop-motion animation mastery. Whether it was the iconic sword-fighting skeletons, theto the two Harpies sent by Zeus to punish the blind soothsayer (remember this for later) for misusing his gift of prophecy, Jason and the Argonauts is a special effects masterpiece even though it was produced over a half century ago.

The Jason and the Argonauts / Doctor Who connection… 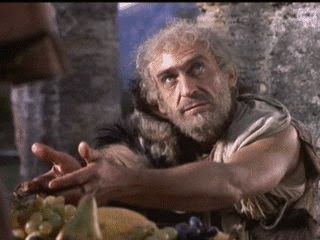 Having seen Jason and the Argonauts numerous times over the years it never dawned on me until recently that Phineas, the blind soothsayer referenced above, was played by none other than Patrick Troughton, three years prior to his becoming the 2nd Doctor on Doctor Who.

Jason and the Argonauts was Troughton’s first of two Harryhausen films he was involved with having also been in Harryhausen’s Sindbad and the Eye of the Tiger. In Jason and the Argonauts, Troughton played Phineas, whom you will remember Zeus too issue with (in the form of Harpies) for misusing his gift of prophecy. The winged females would steal Phineas’ food leaving him only scraps. In return for Jason imprisoning the Harpies, Phineas gives him directions and sends him on his way to get him closer to finding the Golden Fleece.

Continuing the Doctor Who/Ray Harryhausen link, the Fourth Doctor, Tom Baker, was in Harryhausen’s 1973 film classic, The Golden Voyage Of Sinbad, playing the main antagonist of the film. According to sources, it was Baker’s portrayal of Prince Koura that played a big part in his becoming the Fourth Traveling Time Lord back in 1974.

Anyone else have a unexpected Doctor Who / ??? connection they’s like to share? It will be interesting to see what you come up with….