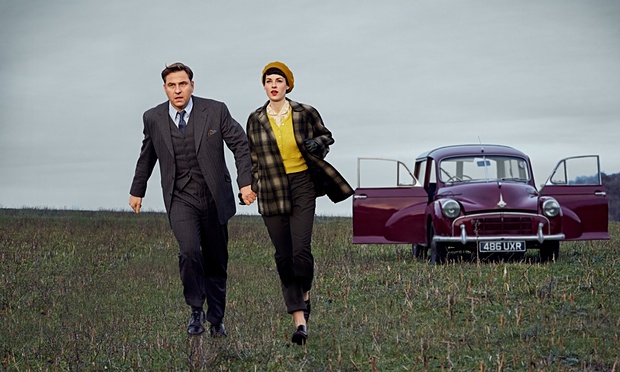 Based on the Tommy and Tuppence characters created by Agatha Christie, Partners In Crime follows the husband and wife sleuths in 1950s England as they stumble into a world of Cold War conspiracy, undercover agents, mysterious evil masterminds and diabolical political conspiracy.

Starring David Walliams (Little Britain, Big School, Mr. Stink) and Jessica Raine (Call the Midwife, An Adventure in Space and Time, Wolf Hall) as the crime-fighting husband and wife duo, Partners in Crime will see the first three episodes adapted from Christie’s novel ‘The Secret Adversary’ and the remaining three episodes being adapted from ‘N or M?’.

Partners in Crime will screen on BBC1 in Autumn 2015 coinciding with the 125th anniversary of Christie’s birth. Partners should see its way to America onto public television stations not long after in early 2016. The 6-part drama is the first of two major new dramas planned for next year involving Christie, the second of which is a new production of the popular Christie 1939 novel “And Then There Were None”, starring Poldark‘s Aidan Turner.

Only halfway through 2015 we’ve already been treated to the likes of Downton Abbey, Grantchester, Call the Midwife, Mr. Selfridge, Wolf Hall, Last Tango in Halifax, Poldark and Crimson Field. With Indian Summers, Home Fires, Arthur & George, The Widower, The Guilty and even a little Sherlock on the books for the last half of 2015, I’m starting to love these drama wars between BBC and ITV. With PBS and public television stations in the States listed as the beneficiary on all the necessary forms, 2015-2016 is shaping up to be the best yet.

And, for those who already have their 2016 calendars open and ready to mark-up, look for a new series of Doc Martin in early 2016 along with the final series of New Tricks, another series of Death in Paradise and, hopefully, a final series of Scott & Bailey. If that’s not enough to set your drama pants on fire, don’t forget we still have the final set of Wallander with Kenneth Branagh, new Endeavour and Lewis episodes AND, the big news, more Sherlock, which is set to begin filming in April 2016.