It’s almost time to put on your bow tie, pick up your sonic screwdriver, put a sprig of celery in your lapel, take K-9 out, grab some jelly babies and board your own personal TARDIS. Doctor Who 9 is nigh upon us. For those that just can’t wait until the series 9 premiere on 19 September, BBC Worldwide North America and Fathom Events are here to help put an end to your own personal case of Doctor Who separation anxiety. 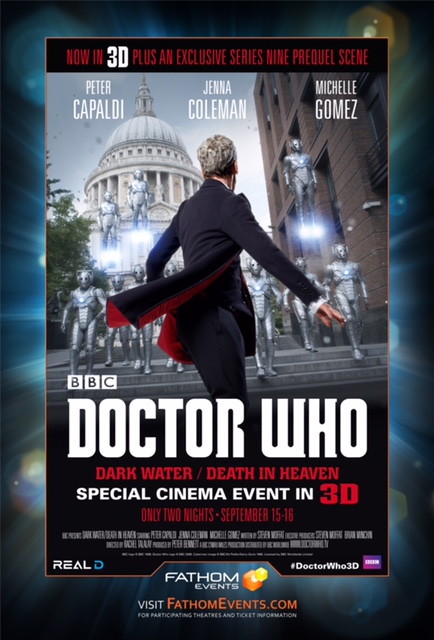 Yesterday’s announcement of the return of Doctor Who to the big screen several days in advance of the premiere for a two-night special theatrical event, Doctor Who: Dark Water/Death in Heaven in 3D has the Internets on high alert. No doubt you’ll remember that in Doctor Who: Dark Water/Death in Heaven, the show’s two-part eighth season finale, the Doctor has come face-to-face with the mysterious Missy, there are Cybermen on the streets of London and old friends unite against old enemies. The two episodes will be presented in RealD™ 3D and Dolby Atmos sound (where available) on September 15 and 16 at 7:30 p.m. (local time).

As if that wouldn’t be enough to set your Doctor Who pants on fire, the event will also feature The Doctor’s Meditation, a special prequel scene to the first episode of Season 9, and an exclusive interview with Doctor Who stars Peter Capaldi and Jenna Coleman, hosted by none other than noted Dr. Sheldon Cooper nemesis, Wil Wheaton.

Tickets for Doctor Who: Dark Water/Death in Heaven in 3D can be purchased online starting this Friday, 31 July by visiting www.FathomEvents.com, or any of the participating theater box offices. Fans throughout the U.S. will be able to enjoy the event in approximately 700 movie theaters through Fathom’s Digital Broadcast Network. A complete list of theater locations will be coming soon on the Fathom Events site as, as you can imagine, additional theater locations are being added daily.