There are far more reasons than the law allows for the fact that I continue to believe that British telly is by far superior to its distant cousin from America. Let us, for a moment, forget about the perennial examples of Spooks vs. 24, Fawlty Towers vs. ‘insert any American comedy series here‘ or Doctor Who vs. ‘every science fiction series except Star Trek. How about a series of bedtime stories for adults and, here’s the kicker, it’s incredibly brilliant telly.

Crackanory is a storytelling television series aimed at adults, inspired by the popular children’s series Jackanory, where contemporary comedians and actors read stories about life in the 21st century all from the same oversized chair. While series one attracted some of the cream of British comedy talent and a wide variety of independent writers, series two of Crackanory featured stories told by Rik Mayall (in one of his final TV appearances), Vic Reeves, David Mitchell, Katherine Parkinson, Meera Syall, Warwick Davies, Ben Miller, Sue Perkins, Johnny Vegas and Ruby Wax. 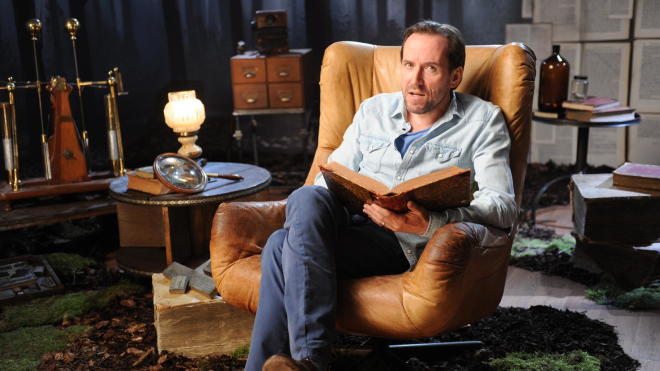 But it was this past weeks announcement that Christopher Lloyd will guest read a story for the third series of Crackanory this Fall on Dave that got me thinking again as to just why British telly continues to amaze. Lloyd is set to bring his trademark Taxi/Back to the Future frenetic delivery to the bizarre noirish story of a police officer who loses his partner in the line of duty but begins to suspect the dead cop has possessed his car’s Sat Nav system.

The varied stories that each individual writer brings to the table are as much of a co-star in the series as the top talent that Crackanory attracts. I’m guessing this is one series that will never be targeted for an American re-make. I honestly can’t see the ‘cream of American comedy talent’ participating and doubt, seriously, that an American commercial broadcast or cable network would give up valuable airtime that could otherwise be used for the likes of the next Geraldo Rivera live special. Here’s what I’m talking about….