When the most highly-anticipated and talked about series since Downton Abbey comes to a close tonight at 9p ET / 8p CT as part of PBS’ Masterpiece series, Poldark fans both new and old, while they might be a bit sad, will cherish the knowledge that series two will soon begin filming with a targeted 2016 broadcast date on both BBC and PBS.

If you’ve been with the series from the beginning, you know of the numerous times in each episode you catch a glimpse of Captain Ross Poldark riding from either screen left to screen right or vice versa across some pretty breathtaking Cornish countryside. 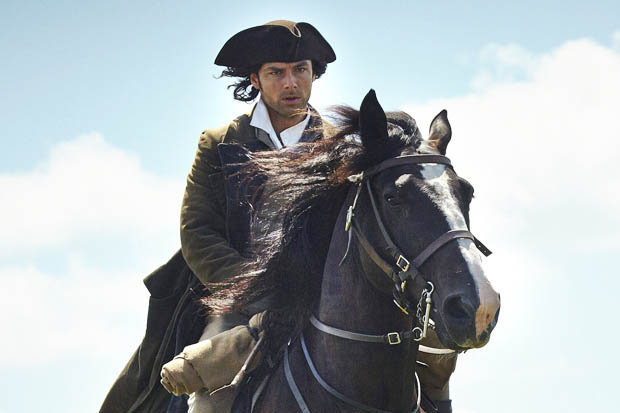 For an actor, it’s one thing to learn your lines and become the character you play. But when you are tagged to play Captain Ross Poldark and given the only form of transport at the time was of the four-legged variety, there’s a certain added element that Aidan Turner had to master to convincingly ‘become’ Ross Poldark.

Recognizing from the start that, given Ross’s background, the Captain was quite adept on a horse, Turner immediately began not only to learn horsemanship but set out to get to know his equine, Irish co-star, Seamus. Fortunately, Turner wasn’t a stranger to horses, having ridden in New Zealand, most likely during his time there filming The Hobbit. Unfortunately, however, for Turner, word is that Seamus has since retired after the filming of series one so he’s going to have to get to know a whole new co-star for his series 2 rides through Cornwall.