Dirk Gently, Douglas Adams’ holistic detective, who was brought to life by Stephen Mangan (Green Wing, Episodes) in a one and done-series, four-episode BBC4 adapatation, will get another shot at success across the pond. Gently bases his methods on the “fundamental interconnectedness of all things”, which relies on random chance methods to uncover connections between seemingly-unrelated cases. 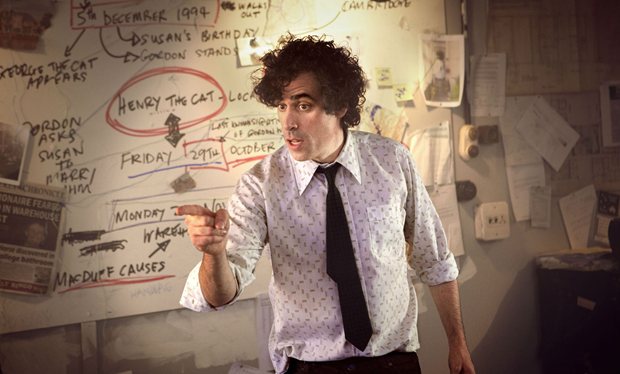 While he may not completely understand what they are, Gently follows the principles of quantum mechanics and practices the art of ‘Zen navigation’, the following of people or vehicles who look like they know where they are going, in the hope that they will lead somewhere you want to be. According to Radio Times, the new series, which will be produced for broadcast on BBC America, will be written by Chronicle’s Max Landis, and set in America “..in the unexpected world of the hyper, absurd, ridiculous Dirk Gently. With an utterly fresh, comically self-aware tone, this series is equally sincere in its danger, humor, violence and drama.

Personally, I can’t see anyone but Mangan as Dirk Gently. And, with the greatness of Darren Boyd as his sidekick, Richard MacDuff, Helen Baxendale as MacDuff’s girlfriend and Jason Watkins as Dirk’s nemesis DI Gilks cast opposite Mangan, this has all the makings of yet another situation where an American remake is completely unnecessary.