It was the red carpets of all red carpets Tuesday night in London with Downton Abbey stars past and present turning out as BAFTA honored the period drama as it enters its sixth and final season on ITV (and PBS). Maggie Smith, Hugh Bonneville, Elizabeth McGovern, Michelle Dockery, Jim Carter, Brendan Coyle, Allen Leech, Penelope Wilton, Laura Carmichael, Lesley Nichol, Sophia McShera, Jim Carter and Joanne Froggatt, as well as previous cast members including Dan Stevens, Nigel Harmon and Dame Kiri Te Kanawa were on-hand as Indian Summers’ Julie Walters presented the entire cast that had gathered with a Special Award that, in the past, had been received only by the cast of Harry Potter.

Also in attendance were Fifi Hart (Sybbie), the twin actresses that play Lady Edith’s daughter, Marigold, and twins, Zac and Oliver Barker, who play Lady Mary and Matthew’s son, George. Even MyAnna Buring who played Edna Braithwaite was allowed in! Not sure how close she was allowed to get to Tom Branson, however. From what I could tell, no Nanny West sightings anywhere, unfortunately. 🙂

While it must have been quite the sight to see much of the cast and crew on the red carpet and on stage, there was one special ‘Kodak moment’ on the red carpet that will send charter members of the Downton Abbey-Nation into an internet brain-freeze wondering just what season 4 could have been if only…well, let’s just not talk about it. 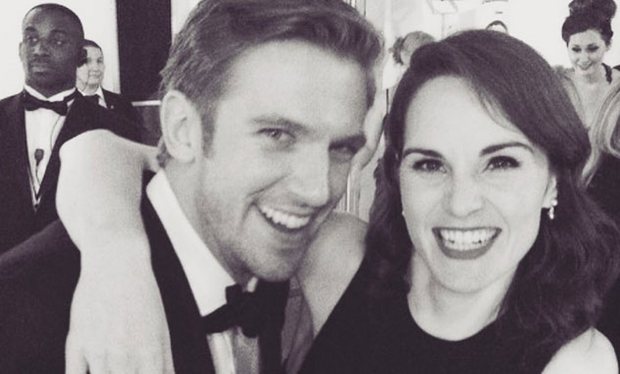 As cast and crew prepare to film their final scenes on Friday, the final days have turned out to be a bit more emotional than expected for some of the cast that had spent a better part of 6+ years of their acting lives with each other at Highclere Castle. Elizabeth McGovern, who plays Lady Cora, quietly confided, “I decided I wouldn’t cry, but I did. I shed a few tears.” Others like Hugh Bonneville, her on-screen husband, took a much-less emotional approach that actually sounds much more fun. “I finished yesterday along with Michelle Dockery (Lady Mary) and Allen Leech (Tom Branson),” said Bonneville. “We had a pint in the pub to say farewell.“

Downton Abbey returns to ITV in September for its sixth and final season with a confirmed January 3, 2016 date for the premiere on PBS as part of the Masterpiece series.