What really happened during Shakespeare’s ‘Lost Years’? In ‘real-life’, these lost years are widely acknowledged as being a crucial period in Shakespeare’s life, long having been a mystery to scholars, and cover his rise from virtual obscurity in Stratford-upon-Avon to fame as a playwright in London. Preferring to grab hold of the potential of great idiocy that might have occurred during these lost times, Bill tells the story of how a hopeless lute player named Bill Shakespeare left his family and home to follow his dream. Sprinkled along the way is a tale of murderous kings, spies, lost loves, and throw in a plot to blow up Queen Elizabeth (Helen McCrory). Is it remotely possible that one man can prove the quill is mightier than the sword? The principle performers behind CBBC’s children’s sketch comedy series, Horrible Histories and Yonderland, star in the show where, together, they will play some 40 roles in the film. 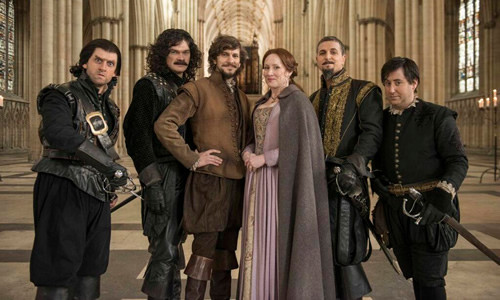 For Mathew Baynton (Spy, The Wrong Mans), Simon Farnaby (Mighty Boosh), Martha Howe-Douglas (Doctors), Jim Howick (The Peep Show, Reggie Perrin), Helen McCrory (Harry Potter), Laurence Rickard, Ben Willbond (Rev, The Thick of It) and Damian Lewis (Homeland, Band of Brothers, Forsyte Saga, Wolf Hall), Bill will be a big departure for the cast of both Horrible Histories and Yonderland given their conscientious effort to be grounded in accuracy as they take more liberties than the law allows with the overall concept of ‘lost years’ in Bill.

While a number of scenes were filmed in and around Yorkshire, Peckham and West Sussex, the closing scenes of Bill were filmed at Shakespeare’s Globe, a modern recreation of the theater where many of Shakespeare’s plays were first performed. Co-writer Laurence Rickard says: “The joy of the Lost Years is we can tell a fun story without trampling on the facts. It gives us license to take William Shakespeare on a truly ridiculous caper, yet end with him becoming the man the world knows.”

Bill will premiere in UK cinemas on 18 September, 2015