Unfortunately, we’ve all heard the endless rumors countless times before. One early idea was to have the next iteration of Blackadder set in the swingin’ 60’s featuring a Dave Clark Five-type band with a drummer by the name of Bald Rick. The most recent addition to the rumor mill that made its way around the Internets a year or so ago had Blackadder in the German prisoner-of-war camp, Colditz Castle.

That rumor/idea was actually fueled by series producer John Lloyd when he revealed on BBC Breakfast that he and star Rowan Atkinson had had the idea of making either a new series of the show, or a feature film, based around the World War II setting.

Fast forward to 2015 and now it’s Tony Robinson’s turn to fan the Internet flames with the thought of a new Blackadder series. The former Time Team and Walking Through History host, who played Baldrick in all four original series, joked recently that a new Blackadder series is a distinct possibility as long as they can afford Hugh Laurie’s wages. 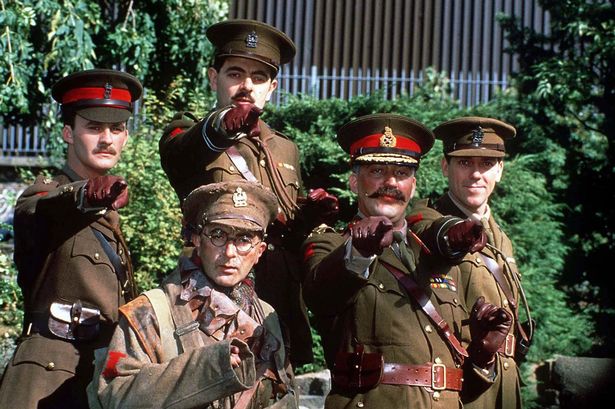 Over the years, while there has been more than one ‘primary hurdle’ of actually being able to pull this off, a recurring major difficulty was getting Hugh Laurie to carve out time for a return. Now that it has been some time since Dr. Gregory House hung up his stethoscope, time might not be such an issue as would be Laurie’s fee, joked Robinson.

“I do think a new series of Blackadder is on the cards,” the comedian and TV presenter joked. “I have spoken to virtually all the cast about this now. The only problem is Hugh’s fee. He’s a huge star now – or so he’d like to think.”

Unfortunately, while there would be no Lord Flashheart, and while the thought of getting the Edmund Blackadder, Baldrick, George, Lord Melchett, Queenie and Lord Percy/Darling band back together is very appealing, rumors of a Blackadder return generally surface more frequently than announcements of a Rolling Stones farewell tour. Much like Fawlty Towers, expectations would be sky-high for a Blackadder return given it had, perhaps, the best ending ever for a British comedy series. It might be time to leave well enough alone and let us remember it as it was some 25+ years ago.