Even with it being the 40th anniversary of the release of Monty Python and the Holy Grail, I have struggled the past few weeks to find the perfect moment to write about Terry Gilliam’s secret to Monty Python animation. Then, like God appearing out of nowhere in the clouds and instructing Arthur, King of the Britians, to ‘seek the grail’, along came Variety’s ill-timed declaration that the man responsible for virtually all of the brilliant animation you’ve seen over the years affiliated with Do Not Adjust Your Set, Monty Python’s Flying Circus and the director of Time Bandits and Brazil had “died at the age of XXX”.

As you can only imagine, the comments and tweets that followed Variety‘s untimely blunder were priceless. While we don’t know if those who sacked those responsible had been sacked, Python fans came out of the woodwork to make sure the world knew that Gilliam ‘wasn’t dead yet’ and wasn’t ready to go on the cart despite Eric Idle’s request to ‘bring out your dead’, and suggested that, perhaps, Gilliam was merely ‘resting’ or ‘tired out after a long squawk’. Thankfully, there was no nearby perch for Gilliam to be nailed to just yet. Variety quickly issued the following retraction. 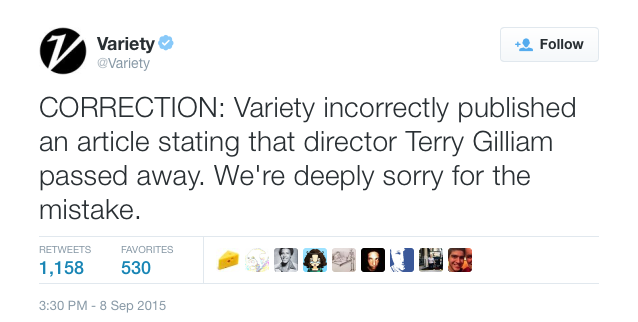 Gilliam, himself, took the announcement in stride, saying, “I APOLOGIZE FOR BEING DEAD especially to those who have already bought tickets to the upcoming talks, but, Variety has announced my demise. Don’t believe their retraction and apology!” 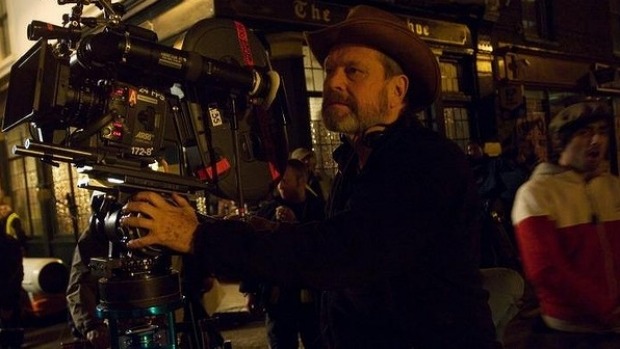