Premiering last night at the Toronto Film Festival, I Saw the Light follows Hank Williams’ sudden rise to fame and struggle with addiction before his tragic death in 1953 at the age of 29 with Westminster-born Tom Hiddleston, star of The Avengers, Thor, War Horse, Woody Allen’s Midnight in Paris and the BBC’s Hollow Crown series, portraying the “King of the Hillbillies”. Based on early production stills, Hiddleston showed he definitely looked the part but, until now, the question remained as to whether or not Hiddleston could master Williams’s trademark Alabama accent along with his music too, given he was set to sing classics such as “I’m So Lonesome I Could Cry”, “Hey, Good Lookin’” and “Your Cheatin’ Heart”.

While I’m not sold yet on Benedict Cumberbatch’s thick Bostonian accent in the upcoming film, Black Mass, opposite Johnny Depp, I’ve always marveled at British actors who are able to speak with an American accent.  If you haven’t seen it yet, you’ve got to witness Sherlock‘s Martin Freeman best Minnesotan-effort in the first series of FX’s Fargo. Hiddleston should have no problem given the fact he played F. Scott Fitzgerald in Midnight in Paris. 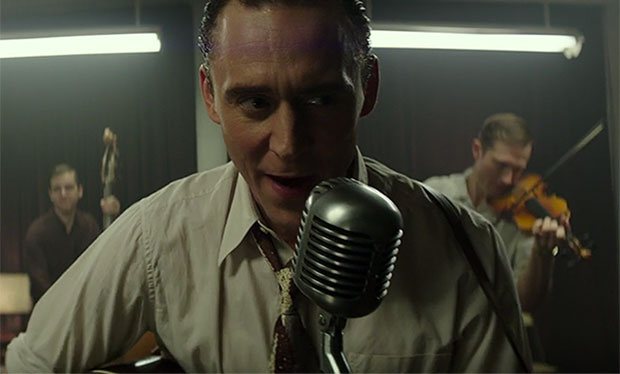 Directed by Marc Abraham (Flash of Genius), who adapted the script from Colin Escott’s biography of Williams, I Saw the Light will tell the story of Williams’ meteoric rise, how he created one of the greatest bodies of work in American music, and the tragic effect of fame on his health and personal life. Williams was one of the major country music stars of the late 1940s and early 1950s, with eight No. 1 country singles to his name. Williams died on New Year’s Day in 1953 in the back seat of a Cadillac at a gas station in West Virginia, on his way to a concert at the young age of 29, a victim of his alcoholism and drug abuse.

Aside from the fact that Hiddleston played F. Scott Fitzgerald in Midnight in Paris, based on this first trailer for I Saw the Light which is due for an American release later this year, we have nothing to worry about. The brilliant thing also, is that it will no doubt erase from my mind palace the memories of a 1964 George Hamilton as Hank Williams.