This is getting serious. Depending on where you hang your hat, we’re talking ‘extra time’ in European football or 2:00 minute warning time in American football. With only days separating members of the U.K. chapter of Downton Abbey-Nation from the beginning of the final series of Downton Abbey, it will be virtually impossible for their American colleagues to successfully shut themselves off from the endless Internet spoilers and numerous armchair reviews that are sure to follow each episode.

Without giving too much away, we can still live vicariously through the myriad of promotional spots that are created to entice not only Downton Abbey P1’s to set up shop in front of the telly for the next several months but also to grab a hold of recent bandwagon jumpers who have just finished binge-watching series 1-5 for the last 48 hours (47.5 to be exact). 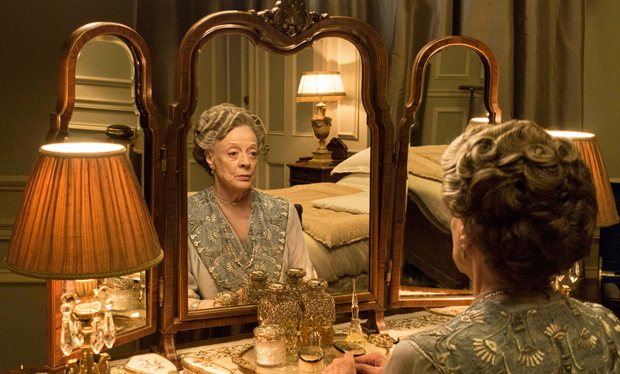 Looking at the initial promotional efforts for both Sundays premiere on ITV in the UK and the ‘first look’ promo from PBS’ Masterpiece series premiere in January 2016, there are times that you’d think you were getting ready to watch two entirely different series. While both view this series as one where the times are changing for the folks at Downton and it’s time for all to say goodbye, that’s about where the similarities end. The UK version oozes sentiment and is a bit bittersweet knowing what’s to come at the end of the series.

The U.S. version seems to focus more on what we love best about the last five series – scandal, sex, class differences, another suspicious woman hanging around the Abbey and everything with more twists and turns before the end. There’s no time for sentiment what with the fact that Mary isn’t riding sidesaddle any more, Edith’s running a magazine and Mrs Patmore has a refrigerator, of all things!

Promos aside, one thing is abundantly clear. Sir Julian hasn’t forgotten what has kept viewers on both sides of the pond (im)patiently waiting for the next installment each waking moment. The writing is brilliant and has more one-liners than the law allows. The good thing is that with the newest trailer just released for Sunday’s premiere, there is no question that the final series will pick up right where the last five left off in the classic one-liner department.

For Violet Crawley, in particular, the final series will prove to be challenging. Seems as though the Dowager Countess might just be leaving the comfort of the ground floor and its drawing room, dining gong and solid social structure and head down an entire flight of stairs….to the kitchen, of all places. “I haven’t been into the kitchens for 20 years,” says the Dowager.  Always looking for the opportunity to dig Violet a bit, Isobel quickly responds, “Have you got your passport?“.