The British Film Institute unearthed a valuable piece of television history this week. Two more missing episodes of the cult comedy, At Last the 1948 Show, which was a precursor to Monty Python’s Flying Circus, have been found 48 years after they aired. Named for a joke about how long it took TV commissioners to make a decision, the series starred John Cleese, Graham Chapman, Tim Brooke-Taylor, Marty Feldman, and Aimi Macdonald as a presenter between sketches, always under the impression that she was the star of the show. 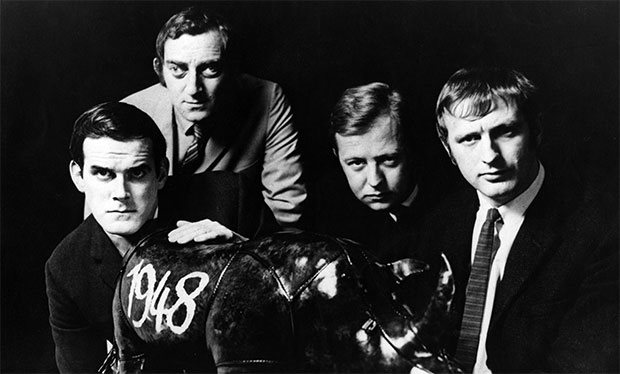 The episodes from the 1967 show had long been thought lost until a fan named Mark Rigby alerted the BFI, the organization whose long-running Missing Believed Wiped initiative has unearthed an array of lost TV programs from Doctor Who episodes to Dad’s Army.

These early incarnations of surreal British television comedy was hugely influential in the creation of Monty Python’s Flying Circus in 1969. At Last the 1948 Show is famous for containing the first use of the phrase “And now for something completely different” which became a Python catchphrase and for showcasing the first outing of the Four Yorkshiremen sketch. Here’s a clip from the new discovery.

John Cleese told RadioTimes.com: “I’m very thankful to the B.F.I. and especially [archivist and historian] Dick Fiddy for this latest discovery. The 1948 Show contained material which could have gone straight into Monty Python.”

Several of the Cleese/Chapman sketches from At Last the 1948 Show eventually did find their way into Monty Python’s live set and recordings, including Cleese’s personal favorite “The Bookshop Sketch”, which is featured in one of the newly-discovered episodes. The skit has turned up in a few different locations over the years, on Monty Python’s Contractual Obligation Album in 1980, and in Marty Feldman’s own show Marty Amok! in 1970.

Steve Bryant, Senior Curator of Television at the BFI National Archive said today: “Once almost forgotten, the recovery and restoration of episodes of At Last The 1948 Show by the BFI over the past 25 years has led to it being acknowledged as one of the key milestones of British television comedy.”