Last Spring, I had the great good fortune to speak to Robin Ellis prior to the return of Poldark to both the BBC and PBS line-up. Without question, one of the most enjoyable individuals and an absolutely delightful interview. Most likely, you know that it was Ellis who starred in the original 1975 series as Captain Ross Poldark. 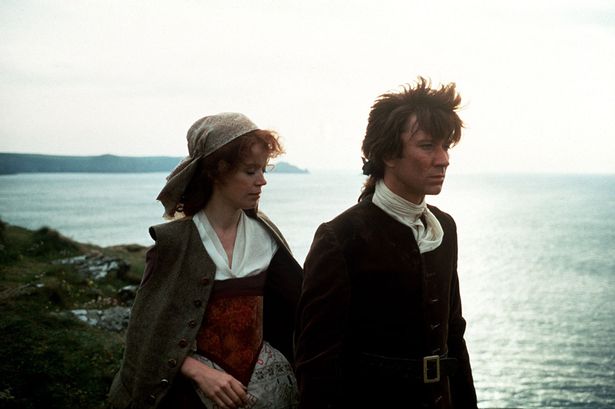 What you may not know, however, is that Robin Ellis also made a very memorable guest appearance in the pilot episode of what is widely recognized, in my mind palace anyway, as the greatest British comedy series ever, Fawlty Towers. In addition to talking with Ellis about the Poldark re-boot, given that 2015 was set to be the 40th anniversary of Fawlty Towers, it seemed the perfect opportunity to speak with him briefly about his appearance as the cockney Detective Danny Brown and charming the likes of Sybil Fawlty.

A pre-Poldark appearance on Fawlty Towers….

TS: Before Poldark, you appeared in one episode of Fawlty Towers. Any remembrances of the frenetic taping and John, in particular?

RE: It was actually the pilot that I was in, the very first episode. It will filmed in 1974 about a month or two before I started doing Poldark. I had just come out of this three years of The Actors Company. I still don’t know why John Cleese chose me. I was at Cambridge with him where we were in a couple of plays together. He was in the Footlights side of the theater and I was in the straight side but he obviously remembered me for some reason. It was extraordinary. I think I earned 200 pounds for the week. I was very nervous. I had never done any comedy. Live comedy. Live in the sense of ‘with an audience’. You don’t know where to look. Whether to play to the audience or not. I was very nervous. 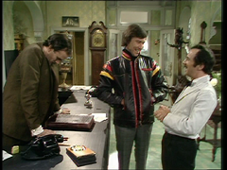 It was a very interesting week. I do remember that I had to speak fluent Spanish in a scene because Manuel is instructed to take my luggage upstairs. As the story goes, Basil is very snobbish towards me because I have a Cockney accent and I’m lowering the tone of his hotel. He tries to get Manuel to take my case to my room but he can’t speak Spanish well enough to get Manuel to understand and I come out with fluent Spanish which was a real effort. I had to learn it by rote and grit my teeth. I did it perfectly first take and they came out and said ‘we’re sorry but we’re going to have to do it again because there was a camera in shot’. We had to do it again and it was in front of an audience. It was a fairly agonizing experience.

As traumatic as it was, it’s wonderful because people love Fawlty Towers. John was very clever. He only did 12 episodes. It stands up as a piece of classic comedy with excellent writing. I’m so glad I did it. It’s a gem to have in your background.

Given that Saturday was the actual 40th Anniversary of Fawlty Towers, Ellis went into much greater detail on his Saturday blog entry written by the acclaimed actor, writer, cook and author. Saturday’s post was Fawlty Towers – Forty Years Old. It was almost 13 years prior to the transmission of that first Fawlty Towers episode when Ellis and John Cleese first crossed paths at Cambridge University in the Trevor Nunn production of Much Ado About Nothing. His guest role was taped Christmas 1974 just prior to Ellis’ starting work on Poldark.

As if I needed another reason to watch Fawlty Towers again, Ellis goes on to explain about how a plot change in the episode caused him to have to re-film a scene with Polly (Connie Booth). Only problem was, he was ‘mid-Poldark‘ so there was a bit of a continuity issue with his Captain Ross Poldark ‘look’.

Ellis also uses his own personal life experiences to share some wonderful recipes from his book, Healthy Eating for Life on the blog. I highly recommend and can personally vouch for Robin’s Smoky Cauliflower Soup recipe! In the meantime, Happy 40th, Fawlty Towers! Here’s to 40 more…