Never having been one to shy away from a serious topic, the forthcoming series of Call the Midwife will be no exception. Episode one of series 5, which will transmit in early 2016 on BBC1 and March 2016 on PBS, will depict the birth of a thalidomide baby. Earlier episodes have dealt with a spina bifida birth, tuberculosis, a little-known condition diagnosed as cystic fibrosis and down’s syndrome all in the historical context in which the story takes place. 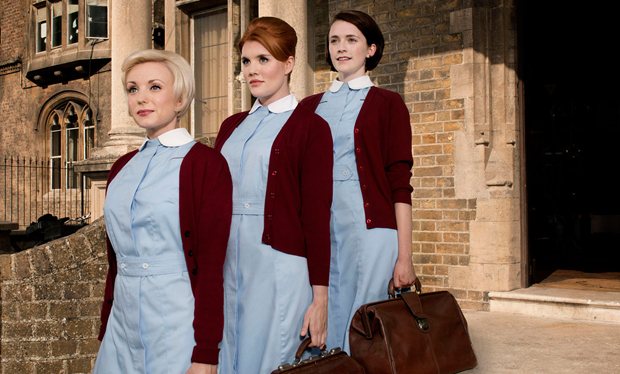 You might remember the finale of series 4, which takes place in 1960, where the residents of Nonnatus House were dealing with a patient whose severe sickness was initially dismissed as a simple case of nerves and then, ultimately, diagnosed with the serious condition hyperemesis gravidarum or a fairly serious form of morning sickness.  Doctor Turner prescribed what was, at the time, a revolutionary new drug, thalidomide, designed to help with nausea and morning sickness.

“You’ll see the effects of thalidomide the drug on the mothers and on the children they gave birth to, but also on their families and on the people who prescribed it. It’s very easy to overlook the fact that clearly for the doctor who prescribed this drug for the women, that’s a pretty devastating discovery when they realise what they’ve done,” said executive producer, Pippa Harris.

“What really shocked me when I started doing my research two years ago was that thalidomide babies were being born but it was a couple of years before people started to join the dots,” said creator/writer, Heidi Thomas. “And that’s a trajectory that our drama plot-line reflects.”

Thalidomide came onto the scene in 1958 under the name, Distaval. It was subsequently found to harm the development of unborn babies and cause serious birth defects, especially if taken in the first four to eight weeks of pregnancy.

From the beginning, the series’ desire to incorporate historically sourced material is what make Call the Midwife the series that it is. It’s poignant, it’s heartbreaking and it’s charming. It also is a series that doesn’t insult your intelligence which is why, for me, series 5 can’t come soon enough.