Partners in Crime, BBC1’s Agatha Christie reboot in which David Walliams and Jessica Raine played married sleuths Tommy and Tuppence, will not be coming back for a second series, according to RadioTimes.com. The drama, which featured Walliams as the frequently hapless Tommy with former Call the Midwife star Raine playing his slightly more resourceful wife, Tuppence, updated the 1920’s espionage Christie novel, “The Secret Adversary” to the 1950s and the Cold War era. 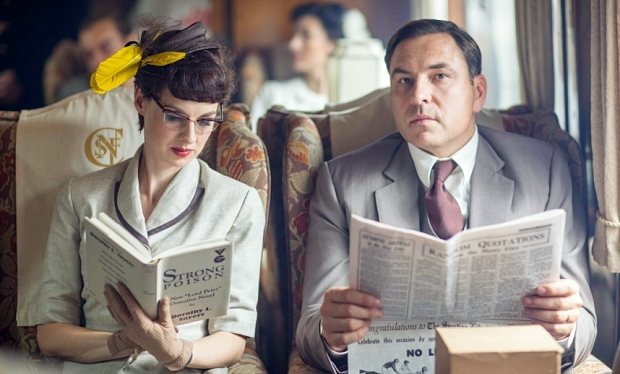 One of the reasons for the cancellation, most certainly, has to be the busy schedules for both Walliams and Raines but one has to wonder if the series simply failed to resonate with the Agatha Christie purists of the world. In some ways, this closely resembles the early story of the BBC/PBS 21st Century reboot of Sherlock. When the series premiered in 2010 with Benedict Cumberbatch as the world’s most famous consulting detective, there were many in the ‘Jeremy-Brett-was-the-greatest-Sherlock-Holmes’ corner that never gave the new series a chance.

Fortunately, there were many more Cumberbatch fans lining up to watch each week than those that chose to stay away on principle. And, thankfully, the BBC and PBS stuck with it and it has turned into nothing more than the best show on television. With ‘Partners in Crime’, when audiences dropped from the opening week, they didn’t stand a chance. Unfortunately, the days are over in which series are given a chance to ‘develop’ over the course of more than one series.

In the original Christie stories, Tommy and Tuppence were a very conventional 1920’s couple, while the combination of Walliams and Raine portrayed a bit of a cheekier version and always seemed to have its tongue firmly planted in its cheek. If you think back over the years, however, there was always a bit of camp in old episodes of Poirot and Miss Marple.

That begs the question of whether or not British audience bought into David Walliams and Jessica Raine in the roles of Tommy and Tuppence Beresford given their previous efforts in Little Britain, Big School and Call the Midwife. One would hope that’s not the reason for two reasons. One, that mindset is very American and not British and, two, David Walliams did a brilliant job with the character of Tommy as did Raine in her role as Tuppence.

Unfortunately, that’s it for British audiences. American audiences will get a chance to decide for themselves beginning in January 2016 when ‘Partners in Crime’ is set to premiere on a local public television station near you. Whether you’re an Agatha Christie purist or not, I’d love to know what you think….