When we last left Eric and David’s Excellent Adventure, our public television colleagues had arrived in Port Isaac and begun filming on the forthcoming behind-the-scenes documentary, Doc Martin – Seven Grumpy Seasons, which is set to premiere on public television stations in America this December. If you missed part 1 yesterday, you can catch up here. 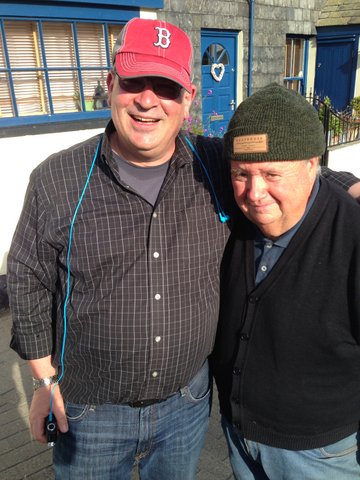 As the remainder of the week unfolded we observed filming of a scene outside Doc’s iconic stone house overlooking the harbor (up the hill from the Large restaurant). The shot presented a number of different crowd control and filming issues, especially because it involved the Doc’s car driving up the very, very narrow street. Coordinating the flow of tourists/pedestrians, local trade people, groups of fans who want to watch, and the deployment of an entire film crew on steep, narrow Roscarrock Road is amazing to see. A Doc Martin shooting day can last 12 hours, sometimes more.

Suffice it to say that over the week, the actors and crew worked incredibly hard – and we were with them just about every step of the way. We got to witness a scene being shot about 30 minutes from Port Isaac in a wooded valley with a small stream. All the camera gear, along with fog machines and other support equipment, had to be hand carried down a narrow, slippery, windy, muddy path. Dennis, Pete and Will were representing Team America – there was literally no room for anyone else to be standing around. Wait until you see the footage. It’s awesome.

We observed a scene between Bert and Aunt Ruth among the local homes on tiny, narrow Dolphin Street, and a major scene involving a busload of children filmed over by the schoolhouse on Four Street, the tiny road that runs through the village. When the camera is rolling and the street is blocked off, nothing can get in or out of Port Isaac.

We were with the cast and crew for nearly an entire day as they staged a key scene in celebration of James Henry’s first birthday. It was filmed at the Village Hall, a short ways up a formidable hill from the school house. There’s a pirate theme. Arrrgh – it was quite a time! 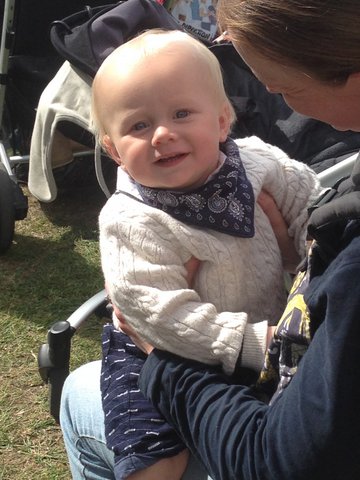 We also caught some action on the “platt”, the ramp area over by the beach (near Mrs Tishell’s) that is often seen in a Doc Martin episode. We captured some filming at the Portwenn Police Station, located just outside the village, opposite a magnificent little beach. And, we were present for some restaurant interiors, shot at the Castle Hotel in the nearby town of Tintagel – a building that looks like a castle which has been used many times over the life of the series. It was here that Martin Ellingham first interviewed for the Portwenn physician job in episode 101. This was also the location where the Doc and Louisa were searching for the kidnapped baby James Henry in episode 506.

I first met Ian McNeice, Caroline Catz, and, then, new cast members Jess Ransom (Morwenna), and Dame Eileen Atkins (Aunt Ruth) as we observed them shooting here in 2011. It was fun to return for a few hours. The place hasn’t changed a bit! Of course, we collected lots of new interviews with people who, by now, feel like old friends. 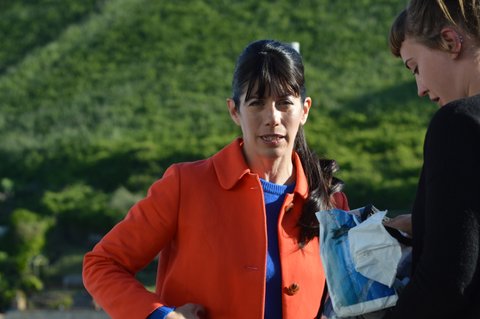 Executive Producer Mark Crowdy and Producer Philippa Braithwaite are great ambassadors for the series, answering many questions fans want to know. Martin Clunes and Caroline Catz were very generous with their time, especially given their schedule during a heavy shooting week. Ian McNeice was amazingly gracious as was Jess Ransom; both spent time with us on off days when they had no obligation to be anywhere near the set. Joe Absolom (Al Large) and Dame Eileen Atkins were equally accommodating. John Marquez (PC Penhale) was kind enough to be interviewed before he headed off to do some police work in the aforementioned wooded valley. 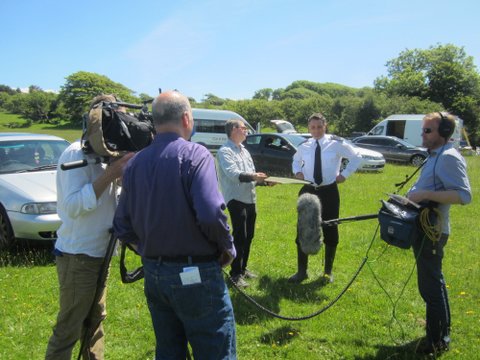 It was fun to speak extensively with new cast member Robyn Addison (Janice), and occasional players like Tristan Sturrock (Danny) and Buffy Davis (Pippa). Director Ben Gregor, a first-timer with Doc Martin, gave us some terrific insights in several “catch him while you can” interviews, and set a terrific tone of “happiness” for each day on the set. We even got to interview Dodger, the stunt dog who plays “Buddy”, that adorable, scruffy beast that makes the Doc miserable with every encounter. His trainer, Sonja Turner, explained how she works with him to achieve those Doc vs Buddy behaviors. Perhaps best of all, she shared as iphone video of Martin Clunes and Dodger dancing on the beach that will have you smiling in an instant.

I’d be remiss if I didn’t acknowledge the amazing folks on the Doc Martin crew, many of whom have been with the series for years. I can attest to this because a huge percentage of these folks were people I first met on set back during the filming of Series 5. All were extremely tolerant of us invading their turf, and many went out of their way to aid us in our work. From loaning gear to enhance location lighting, to assisting with audio feeds, to allowing us to stand literally shoulder to shoulder with them to get the best camera angles, we couldn’t have asked for better hosts. They’re pros, every last one of ‘em. 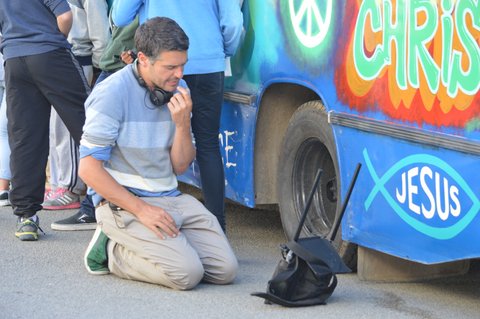 So now our work really begins; taking the raw pieces that Pete and Will captured in Port Isaac and turning that audio and video into captivating stories about a series that so many of you have come to enjoy. Buffalo Pictures, as well as the Doc Martin cast and crew, put their trust in us to show you how and why Doc Martin is the special creation that it is. We hope we can live up to their expectations – and yours!

Buck up, Clunatics! Doc Martin – Seven Grumpy Seasons premieres in December 2015 on public television with the 7th series of Doc Martin not far behind in early 2016.