Update as of Oct 16, 2015: KERA-TV will air The C Word on Monday, October 19 at 10:00p. As the program contains strong language and nudity which may be upsetting to some, viewer discretion is advised.

October is Breast Cancer Awareness Month in America. Over the next several weeks, U.S. public television stations will air, perhaps, one of the more important dramas to have hit the small screen in recent memory. Sheridan Smith stars in The C-Word this October on public television. Having had the great good fortune to have seen this at the 2015 BBC Showcase in Liverpool back in February, this is powerful telly that you cannot afford to miss. While most 60-minute programs produced for the small screen seem like they are 90 minutes…or longer, The C-Word is the polar opposite in that it’s a 90-minute film that seems like a 60. 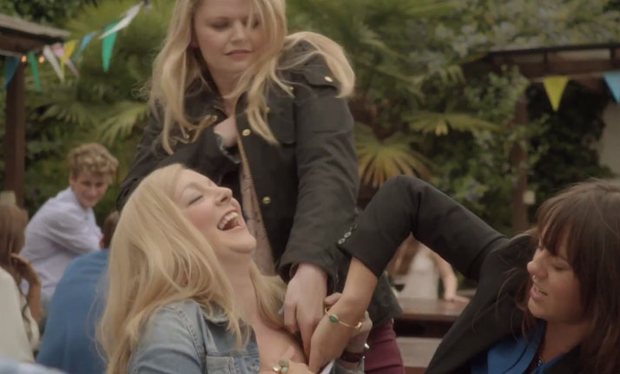 The one-off special is nothing short of extraordinary. It’s the true story of cancer blogger Lisa Lynch, portrayed brilliantly by Sheridan Smith (Jonathan Creek, Gavin & Stacey, Cilia). Lynch, who at the age of 28 was diagnosed with breast cancer, decided to write a funny, no-nonsense, witty and incredibly candid blog about her experiences. She worked closely with screenwriter Nicole Taylor on the adaptation and was involved in casting Smith to play her shortly before she died in 2013 at the age of 33.

Smith said, “I’m so sad that Lisa won’t get to see the finished drama, having been so involved in the development of it. I’m honoured and humbled that she wanted me to play her on screen, and I hope that I will make her proud.”

Lynch’s life as a magazine editor’s is turned on its head when she is diagnosed with what will end up being terminal breast cancer. At the time, her life was filled with talk of weddings, upcoming road-trips and work deadlines. Determined not to lose her ‘zest for life’ and to not let cancer change her, Lynch gained a world wide following following the diagnosis as she refused to become some kind of stereotypical ‘cancer patient’. Her ability to write about her ‘new’ life and the struggles that lie ahead in a positive yet honest way, struck a chord with strangers facing their own lonely struggles to where you can’t help but be inspired by her courage and bravery.

While it may sound like a downer, The C-Word is one of the most uplifting, positive stories to come along in quite some time. Remember, cancel all plans once you zero in on the program schedule of your local public television station and place yourself in front of the telly and take it all in.

The C-Word airs this month on public television stations in the U.S.