With heavy emphasis on the word loosely, Seth Grahame-Smith’s 2009 novel, Pride and Prejudice and Zombies, is ‘loosely’ based on the Jane Austen novel of almost but quite the same name. For PP&Z, it seems as though Pemberley has come under attack from the undead. Fortunately, for all, the Bennetts knew karate. The big screen version, due to come out February 2016 in the UK, stars Downton Abbey‘s Lily James as Elizabeth Bennet, Sam Riley as Mr Darcy and Doctor Who‘s Matt Smith as Mr Collins.

While this might be a bit of a change for Lily James, going from Lady Rose in Downton Abbey followed by the title role in Kenneth Branagh’s Cinderella, it’s not the first time there has been a Doctor Who/Pride and Prejudice crossover. The Doctor’s current companion, Jenna Coleman, stepped out of the TARDIS during Christmas 2013 to star as Lydia Wickham in Death Comes to Pemberley. 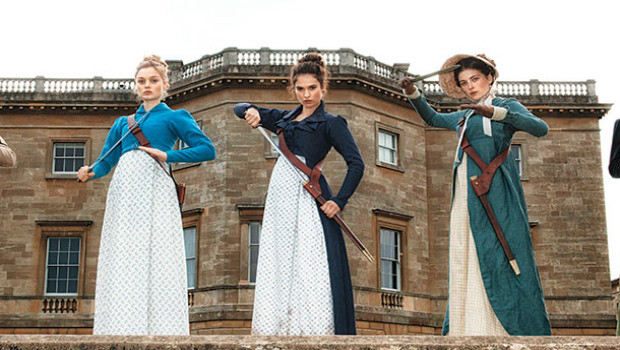 As the story goes, it seems as though James’ Liz Bennett is being pressured by her mother to marry into the wealthy upper classes. This just might be where the big screen similarities to Jane Austen’s novel ends. But, thanks to martial arts training from her father, Liz and her sisters are far better suited to defending the English countryside from the grips of a horrifying zombie plague. Sam Riley’s Fitzwilliam Darcy, appropriately, is the pompous zombie hunter with Douglas Booth (Great Expectations) as Darcy’s BFF, Charles Bingley, and Jack Huston (Boardwalk Empire) as Darcy’s nemesis, George Wickham.

It may not be Jane Austen but it does look like fun….kind of.