There’s something about British comedy over the course of time that makes you wonder how two people could ever hook-up much less cross paths. You know, those like Basil and Sybil Fawlty who are constantly at each others throats but you get the sense that neither of them would survive without the other.

The same could be said (maybe) for Tim and Gareth (more on this later) in the BBC version of The Office, Hyacinth and Richard in Keeping Up Appearances and, now, Andy and Lance, two ‘detectorists’ (practitioners of the detector) who bicker constantly and re-tell the same jokes over and over. 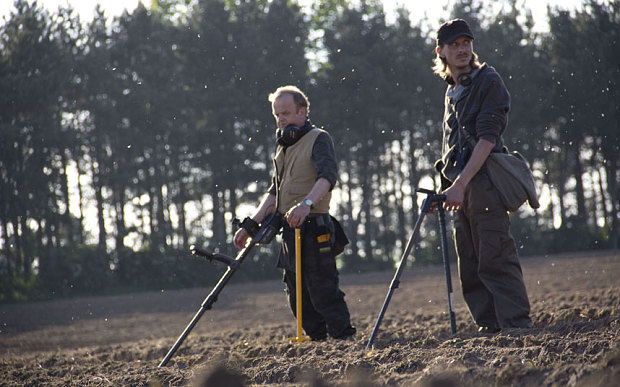 The winner of the comedy.co.uk award for Best New Comedy sitcom in 2014, the BAFTA award-winning first series is headed to American public television stations this month with series 2 set to transmit on BBC4 in late 2015. In series 2, Andy and Lance continue to scour the English countryside for that life-changing ‘find’ which proves to be a bit more challenging now that Andy (Mackenzie Crook) has a few more responsibilities in life.

Created by, written by and starring MacKenzie Crook, who knows more than his fair share about pathetic and touching friendships from his days as Gareth Keenan in Ricky Gervais’ The Office, The Detectorists also stars Toby Jones who, prior to the BBC 4 comedy series, starred in the Truman Capote biopic Infamous, then as the voice, and movements, of Dobby the House Elf in Harry Potter franchise.

The Detectorists 2 will hit BBC4 in late 2015 with series one headed to American public television this Fall.