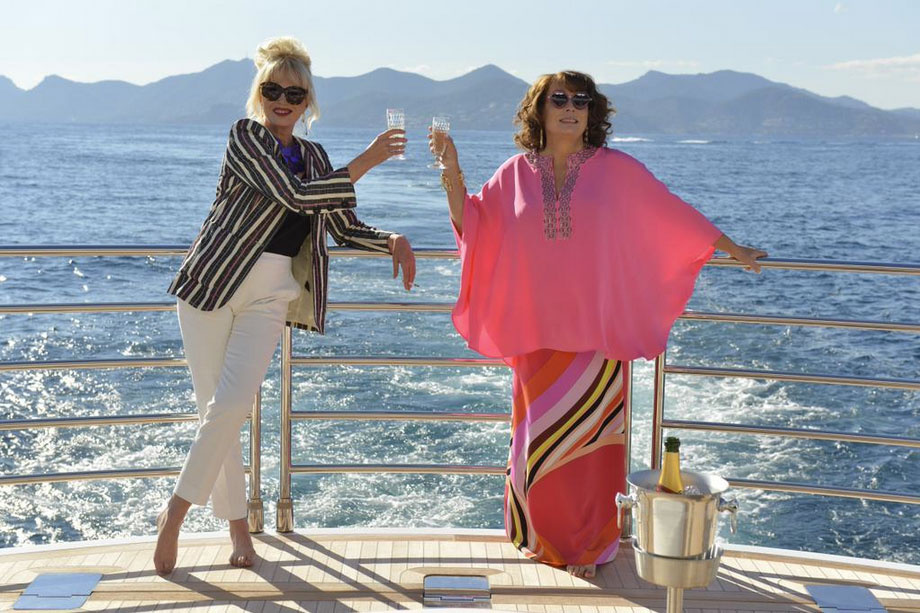 What started out as your run-of-the-mill, everyday £10,000 bet between Absolutely Fabulous co-creator/star, Jennifer Saunders, and former partner in the comedy sketch duo of French & Saunders, Dawn French, is now much closer to reality as filming has begun in the UK and the South of France on the new AbFab movie tentatively titled, Absolutely Fabulous: The Movie.

According to the Radio Times, the new film opens with Edina “Eddy” Monsoon (Saunders) and her drink and drug-addled friend, Patsy “Pats” Stone (Joanna Lumley), shopping, drinking and clubbing their way around London’s trendiest hotspots before a major incident at an uber fashionable launch party sees them engulfed in a media storm and relentlessly pursued by the paparazzi. Penniless, the pair flee to France’s sun-soaked French Riviera where they conspire to make their relocation permanent and live the high life forevermore.

All the old favorites are back for the BBC comedy’s 2016 debut outing on the big screen, with Julia Sawalha as Eddy’s long-suffering daughter Saffy, Jane Horrocks as Bubble and June Whitfield as Mother, plus the promise of plenty of A-list guest stars from the worlds of acting, fashion and music.

In addition to the former star of Vicar of Dibley, who is reported to have a role in the upcoming feature, one can only imagine the number of people that have already begun lining up for cameo roles in the newest AbFab effort by Saunders with a whole new set of other characters, including a daughter for Saffy.

Saunders has frequently mentioned that she wants to cast everyone who has ever been in the series so expect return performances from Celia Imrie, Kathy Burke, Helen Lederer, Naoko Mori, Mo Gaffney and Christopher Ryan. We might even get repeat visits from the likes of Lulu, Emma Bunton, Naomi Campbell, Elton John and Kate Moss.