When the new series of Doc Martin returns to public television stations in the States this January, viewers will be treated to a very familiar face in episode 7 as none other than Sigourney Weaver turns up in Portwenn. The actress, known for her brilliant roles in Alien and Ghostbusters, left Hollywood for a small part in Doc Martin – which is set in Cornwall – earlier this year after a small chance meeting with Clunes on The Jonathan Ross Show last year. 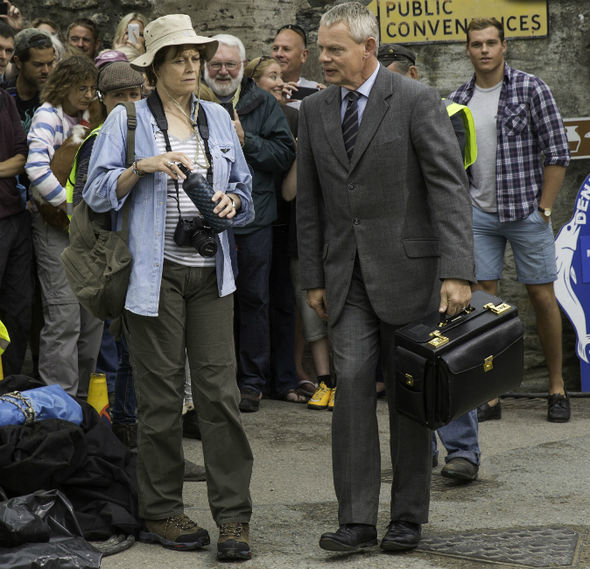 Martin, who plays Dr. Martin Ellingham in the show, appeared on Ross’ show again this past weekend where he revealed it was thanks to Jonathan that Sigourney came to him for a part. “I came on here to plug Arthur and George and Sigourney Weaver was here who I’d never met,” recalled Clunes. “She said ‘Oh I’ve watched every episode of Doc Martin…’

“It turns out, she is best friends with Selina Cadell – they were students together – who plays Mrs Tishell, our chemist and so that’s why she’d been watching“, said Clunes. Selina Cadell told TV Times, “She plays a brash American tourist who walks into Mrs Tishell’s tiny chemist, imagining she’s going to get some kind of big welcome because she says she has Cornish roots, but Mrs Tishell isn’t having any of it.”

By a stoke of luck, Clunes was joined by his wife and producer of the series Philippa Braitehwaite, 51, when the Academy Award-winning star came running for a part. Martin added: “My wife, was here afterwards and Sigourney said, ‘Oh can I be in it?’ and she said, ‘OK alright’.

“We wrote a part for an American tourist and thought let’s wait and see if she likes it… and everything fell into place and over she came with her husband, Jim, and she was brilliant, she was really nice, the crew were so excited, so excited, I fell off my chair twice!”

Series 7 of Doc Martin will premiere in January 2016 on U.S. public television stations. Sigourney Weaver’s cameo will be in episode 7,