For much of the information-starved members of Downton Abbey-Nation, I think I can safely say we are at maximum separation anxiety even though we are now only a mere two months away from the final series premiere on Sunday, January 3, 2016 on PBS. While it’s hard to completely void yourselves from the Internets for fear of hearing that one spoiler that will forever taint your bit of Sunday night appointment television, there are some places that you can go without too much trepidation and still get some quality bits of info.

Personally, I’d stay away from Facebook until January 2016 as you never know who might be a friend of a friend that just happens to live in the UK and they begin to rant about ‘last night’s episode’ of Downton Abbey and, before you know it, you have the plot line for the entire series. The place to be for all your Downton Abbey information with a twist is Twitter. After all, how many spoilers can you pack into 140 characters or less? While most all of the cast have verified Twitter accounts, the best ones are manned by some pretty creative folks.The best, hands down, has to be @LadyMarys_Eyebrows with her ‘perfectly arched and snarky brows’. 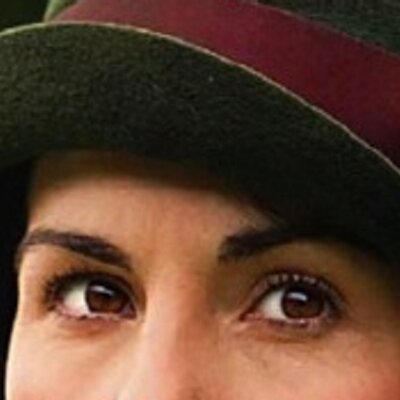 For a bit of the ‘downstairs’ perspective as only O’Brien could provide and  definitely not wanting to take a back seat to anyone that resides upstairs is @OBriensBangs which, even though her namesake has been gone from Downton since the untimely death of Matthew (hope I didn’t spoil it for anyone), she still has quite a finger on the pulse of ‘everything Downton’. In her words, “evil things lurk beneath these twisted bangs“.

Up next is @DowntonThomas where you can get all the inside dirt on everyone at Downton. The self-proclaimed ‘undisputed heartthrob & romantic lead in Downton Abbey‘ seems to be most proud that Lord Grantham, himself (@HughBon), has blocked him.

Who knew that Lady Violet, herself, the person that couldn’t handle a Downton that suddenly had electricity would be on Twitter. From the mind palace of the lady that really doesn’t know what a weekend is, you must check out @LadyVGrantham for all the news that isn’t defeatist as that is SO middle class. 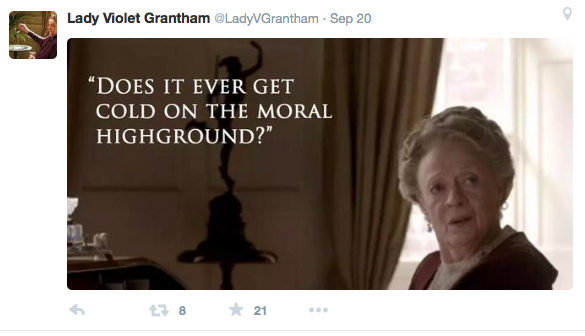 And, finally, for a bit of news that is not only Downton-related but about UK pop culture in general, check out the always secretive @MrBatesLegal. How can you go wrong with someone who lives by the mantra,”If the cane don’t fit, you must acquit!” 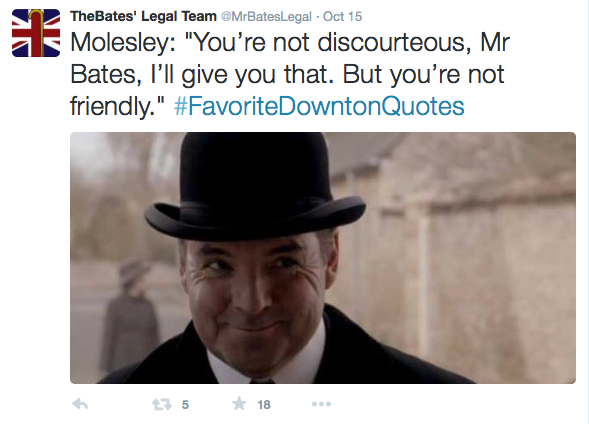 Saving the best for last, while it’s not ‘Downton-related’, one says you must head over and see what The Queen is up to. There’s no better way to keep up with the thoughts of Her Royal Highness The Queen, herself, than by following @Queen_UK who is quick to remind you that somewhere on Planet Earth, it’s always Gin O’Clock. Trust me, you’ll thank me later. 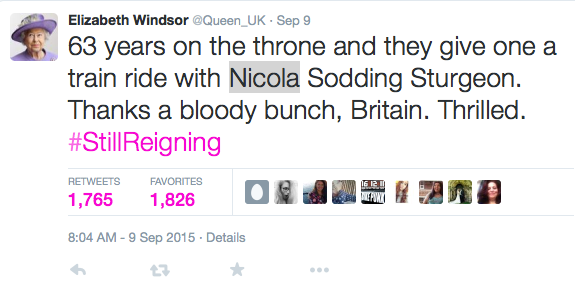