Trollied, which is set in a fictional supermarket in the north-west of England, is back beginning tonight at 9p on Sky 1 HD for it’s 5th series! I happen to love this series if you haven’t figured it out by now. Thankfully, the series has survived a number of cast departures over their first four series, most notably, Jane Horrocks as ‘acting deputy manager’ Julie and Mark Addy, who starred as Andy, Valco’s Head Butcher. I’m going to go out on a limb and think that Addy is probably just a bit wrapped up in that little-known HBO series, Game of Thrones, while Horrocks has recently returned to her AbFab days as Bubble in the forthcoming feature, AbFab: The Movie, which is currently in production. 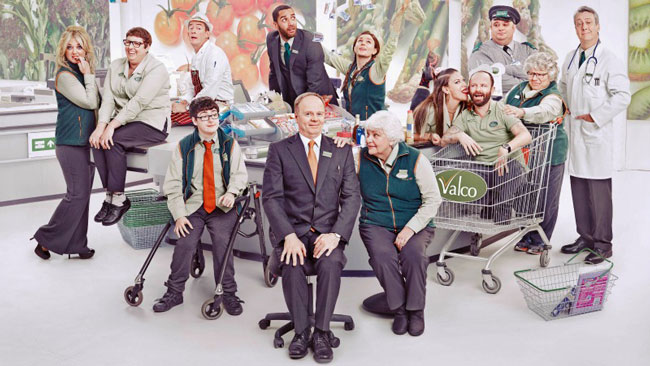 Thankfully, Branch Manager Gavin Strong (Being Human‘s Jason Watkins) is still at Valco along with former checkout girl Katie, who is back with a vengance but now in HR! The greatness of Stephen Tompkinson has, once again, shed his tortured DCI Banks demeanour to head the pharmacy at Valco. He is first to remind you that while he’s not a doctor, he is on the front line of medicine and he’s here to save lives.

Not only has Valco survived the normal staff turnover that one would associate with a supermarket, they were able to survive Top Gear‘s Supermarket Sweep in Hatchbacks a few years back when then series hosts Jeremy Clarkson, Richard Hammond and James May drove their 1980’s hatchbacks around a specially designed course in the aisles of a supermarket, to see who can get round the quickest.

Filmed at a full-sized fake supermarket located at The Bottle Yard Studios in Bristol, the fifth series of Trollied  will see Valco in for a bit of trouble from the outset. Mainly, the staff at Valco come under threat from a rival budget store chain, Lauda, opening nearby and run by notorious manager Cheryl Fairweather (W1A‘s Sarah Parish). On the personal front for manager Gavin, however, he falls for the charms of newcomer Cheryl, but is she all she appears to be? Pharmacist Brian (Tompkinson) wages an ill-advised war on the new rivals and Valco heiress Charlie worries her new beau is using her to climb the retail ladder. Among the returning staff are store assistant Colin and checkout operator, Lisa, along with checkout assistant Harry and Margaret, who made the leap from deli assistant to Pharmacy assistant in series 4. And, that’s all in episode 1!